Training to Stop an Active Shooter

This past month two active shooter/killer incidents, one in El Paso, TX, and one in Dayton, OH, put mass shooter interdiction in the spotlight. As news coverage breaks, questions arise about tactics and strategies for Network members who may be caught up in an active shooter attack. For several years, my school, The Firearms Academy of Seattle, has been teaching its own curriculum on how to stop an active shooter (See https://firearmsacademy.com/handgun/active-shooter-interdiction). For my own continuing education, this year I attended two similar courses taught by well-respected instructors. I came away from those experiences with both a clearer understanding of the problem and a newly committed resolve to keep offering this training, as it is critically needed.

I’d like to share brief snapshots of the classes I took and my own viewpoints as reflected in my Active Shooter Interdiction course.

Our regular readers should need no introduction to John Farnam. He is a Network Advisory Board member, has appeared in this eJournal on a regular basis and is featured on one of our educational DVDs. He came out with his training to stop terrorism and mass shooter events a year ago, and I was anxious to learn more about his viewpoint on the issue. When I took his course earlier this summer, I was happy to see that his offering is similar to that of FAS, with an emphasis on shooting under stress, although he trains students to use both rifles and pistols in the fight. 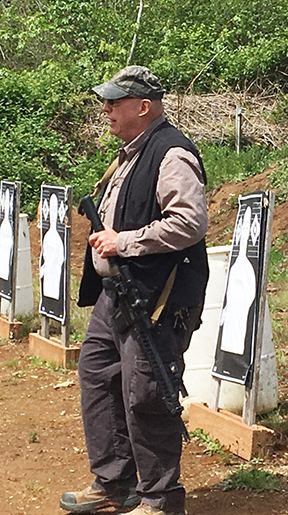 Farnam’s course, entitled Armed Response To A Terrorist Attack, is designed to prepare armed citizens to counter the threat of terrorist violence and other active-shooter events (See http://defense-training.com/training-courses/). Farnam explains his focus in this manner:
“Current events indicate a steady increase in terror-related attacks against westerners. Violent extremists and other savages are actively targeting LEOs, military servicemen and women–as well as their families–to be butchered in public. In addition to LE/MIL individuals and families, we see a rise in these types of attacks on virtually any target of opportunity. Even members of their own culture/faith/ideology are martyred for their depraved cause! This trend will likely continue for the foreseeable future.

“For that reason, we have seen the need to develop this specialized firearms course with a focus on armed response to these unique dangers in our modern world.”

In the classroom Farnam covers “practical options and tactics intended to give individual operators the life-saving mindset and skill sets for prevailing against such attacks.” Out on the shooting range, students participate in drills that simulate attacks in movie theaters, restaurants, shopping malls and other active-shooter scenarios.

Live-fire scenarios include drills in which “the student starts with his pistol, then goes and retrieves his rifle, gets it running, then finishes the drill. We do a lot of exercises where threats are mixed-in with non-threats. Expect long-distance pistol shooting!” Farnam warns. He notes that his course is intended for serious shooters with prior training and isn’t suitable for beginners.

One of the biggest differences between John Farnam’s program and mine at The Firearms Academy is that Farnam includes rifles in his training. I think that is commendable! The reason we do not include them at FAS is that it is illegal to carry a loaded rifle in a motor vehicle here in WA state. Having said that, being able to grab a rifle to confront a rifle-wielding threat makes a lot more sense than confronting the same threat with a pistol. If you can legally carry a rifle in a motor vehicle, that’s great and is recommended. Just be sure you can secure it correctly. In urban and suburban areas where you might logically need such a weapon, you are in the same environment where the most car prowls and thefts take place.

Lt. Col. (Ret) Ed Monk is one of the newer instructors on the national scene. He runs Last Resort Firearms Training (https://www.facebook.com/Last-Resort-Firearms-Training-180316642038491/) in White Hall, AR, and is a Rangemaster certified instructor. Rangemaster Firearms Training Services is the school run by Network Advisory Board member Tom Givens and his wife Lynn. His association with Rangemaster gave him instant credibility with me as an instructor. If you are close enough to Arkansas, you would be well served by attending his training. 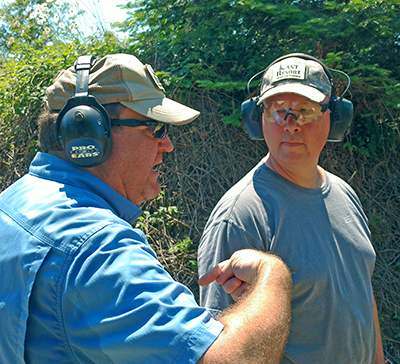 I first met Col. Monk when I attended the Rangemaster Tactical Conference a couple of years ago when it was held in Arkansas. He gave a four-hour classroom presentation entitled Active Shooter Threat and Response. I was so drawn in by the depth and breadth of the presentation that I attended it twice that weekend and detailed what I learned in an article at https://armedcitizensnetwork.org/april-2018-editorial. I think I can safely say that there is no single person who has done as much research into the active shooter phenomenon as Ed Monk. His classroom presentation, a synopsis of that research, is both riveting and entertaining. He takes full advantage of the Power Point method of presentation and uses it to good effect. 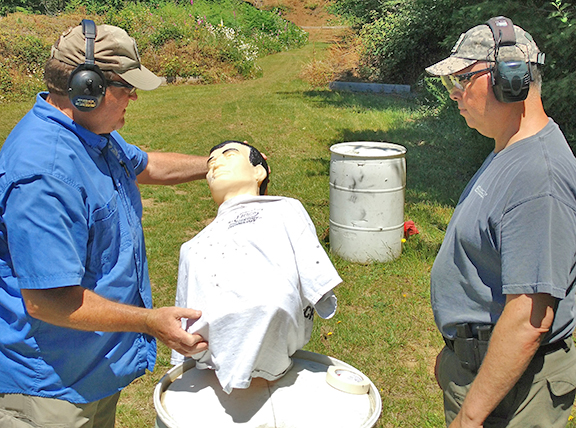 I invited Monk to come to Firearms Academy to teach a three-day Active Shooter Threat and Response class to include the seminar contents as well as the range exercises that accompany his training course. I was not disappointed! I believe the most important take-away from this class is to understand the time factor inherent in a mass shooting attack. When a mass shooting is under way, an innocent person is shot every six to 10 seconds. If it takes police five minutes to respond, up to 50 people can and likely will be shot during that time. An immediate response is required to minimize the carnage, and typically that necessitates an armed individual on the scene or within hearing range. 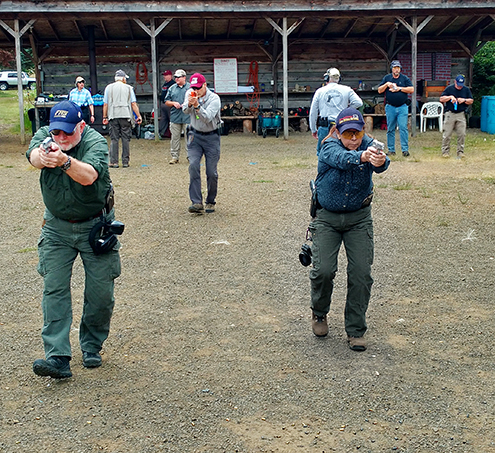 Monk’s course goes far beyond studying in the classroom. Range training consisted of both shooting drills to increase student confidence and exercises to determine the outer limits of student shooting ability. Once students have a good understanding of how close they need to be to get good hits, scenario training is incorporated into the class. Scenarios are as big a part of Monk’s course as of Farnam’s, but their approaches differ a little. Farnam’s emphasis was getting to cover and taking relatively safe shots, whereas Monk’s focus was on moving closer–both by shooting while moving and moving in close enough to make the shot. Both concepts have merit. Students in Monk’s class reported that they appreciated the simplicity of the exercises. Using three-dimensional targets in simulated incidents was widely considered the most worthwhile exercise.

After the San Bernardino, CA shooting in December of 2015 that left 14 dead and several more wounded, I decided that I wanted to start addressing this specific threat in my training courses. I estimated that a good number of my students would rise to the challenge and attempt to stop an active shooter if necessary, as opposed to fleeing. I am not passing judgment on those who would flee instead of staying and trying to take out the shooter; I’m just offering the training for those who would stay.

In an FAS Active Shooter Interdiction Course, our emphasis is on training students to shoot their handguns accurately under stress at long distances. We spend a portion of the first day diagnosing shooter errors and correcting as needed, then establishing the distance where the student can be expected to get a stopping hit under range conditions. This is done on paper targets on our square range. Then we go to a 50-yard range, which we have specifically set up to train for long-distance shots under stress. The range is equipped with five rows of barrels from 10 to 50 yards at 10-yard intervals, so five students can work through the exercises simultaneously. The steel targets include an eight-inch round plate, a 16-inch round plate, and a full-sized silhouette. The students run forward from barrel to barrel to simulate seeking and shooting from behind cover and engaging the steel targets while under the physical stress of running.

We break the class into teams and have them compete in a variety of exercises as a team. The competitive exercises are designed to train the students to hit under moderately stressful circumstances, but also to show students where their limits are. Some people can hit the eight-inch plate consistently at 50 yards, others at 20 yards. But all the students end up hitting the full-sized silhouette at the 50-yard line. 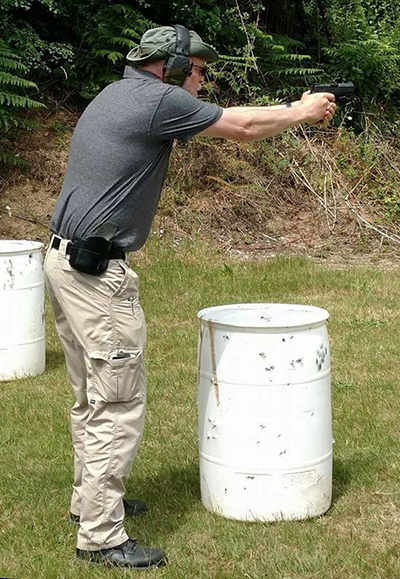 We then leave the range and put the students in tactical scenarios, much like both Farnam and Monk do. The purpose of these scenarios is to enact common active shooter scenarios so the students will have experienced something similar in their training in case they encounter it in real life. Finally, we do force-on-force training with airsoft guns, something neither Farnam nor Monk includes in their programs. This segment includes six scenarios. Incidents range from a church, a grocery store and a subway train as well as other situations and we reenact some real-life examples from the past. The students get to experience the events from the standpoint of someone caught up in the middle of an active killer attack. De-briefs about their responses are part of the learning. 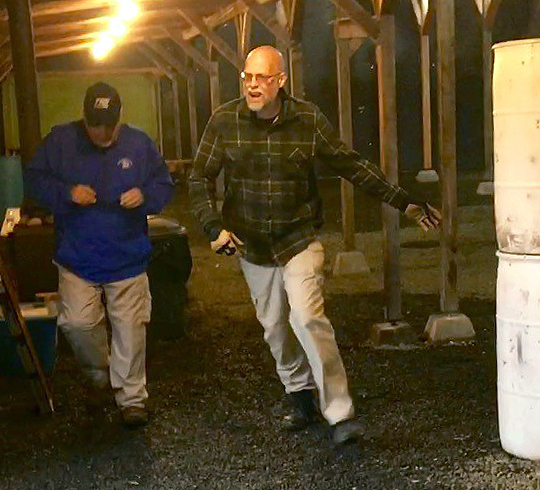 Additionally, in the FAS Active Shooter Interdiction Course, we draw on our relationships with two people who have stopped active shooters. The first is former Air Force Security Airman Andy Brown, author of Warnings Unheeded, who in 1994 shot and killed a rifle-wielding killer on Fairchild Air Force Base, outside of Spokane, WA. (See also https://armedcitizensnetwork.org/psychological-aftermath-of-justified-homicide) Andy still lives in the Spokane area, and when he can, he comes over and assists in the teaching of our course and gives a presentation on what happened and how he stopped it. When he can’t make it, we have his lecture on video.

In June of 2018 one of our own FAS students was in a Walmart in Tumwater, WA, when a mentally disturbed individual started shooting in the Walmart. Once outside the store, he kept shooting and ultimately shot and paralyzed one individual. Before he could do more damage, David George shot and killed him as reported at https://www.ems1.com/ems-heroes/articles/385052048-Firefighter-EMT-speaks-out-about-taking-down-Walmart-shooter/. He has spoken several times at my school and we play a video in which he relates his experience during lunch time classroom sessions in our course.

One thing Col. Monk discusses is the response of active shooters to being challenged. He says that if the active shooter is a domestic, mentally-ill individual, they typically although not always cease their shooting rampage and turn the gun on themselves or attempt to flee. On the other hand, the terrorist active shooter will likely not stop their rampage, but instead, turn the gun on those trying to stop them. I have concluded that the armed citizen who decides to engage an active shooter had better have a high skill level and carry a full-sized gun in at least 9mm. Before the San Bernardino shooting, I would find myself on occasion slipping a five-shot J-frame revolver into my pocket on warm days. I stopped doing that the day after the San Bernardino shooting. After that, I started carrying a full-sized pistol at all times.

__________
Next month we feature a one-on-one interview with Ed Monk exploring “never give up” survival strategies for a variety of situations, including times when we’re denied access to firearms.