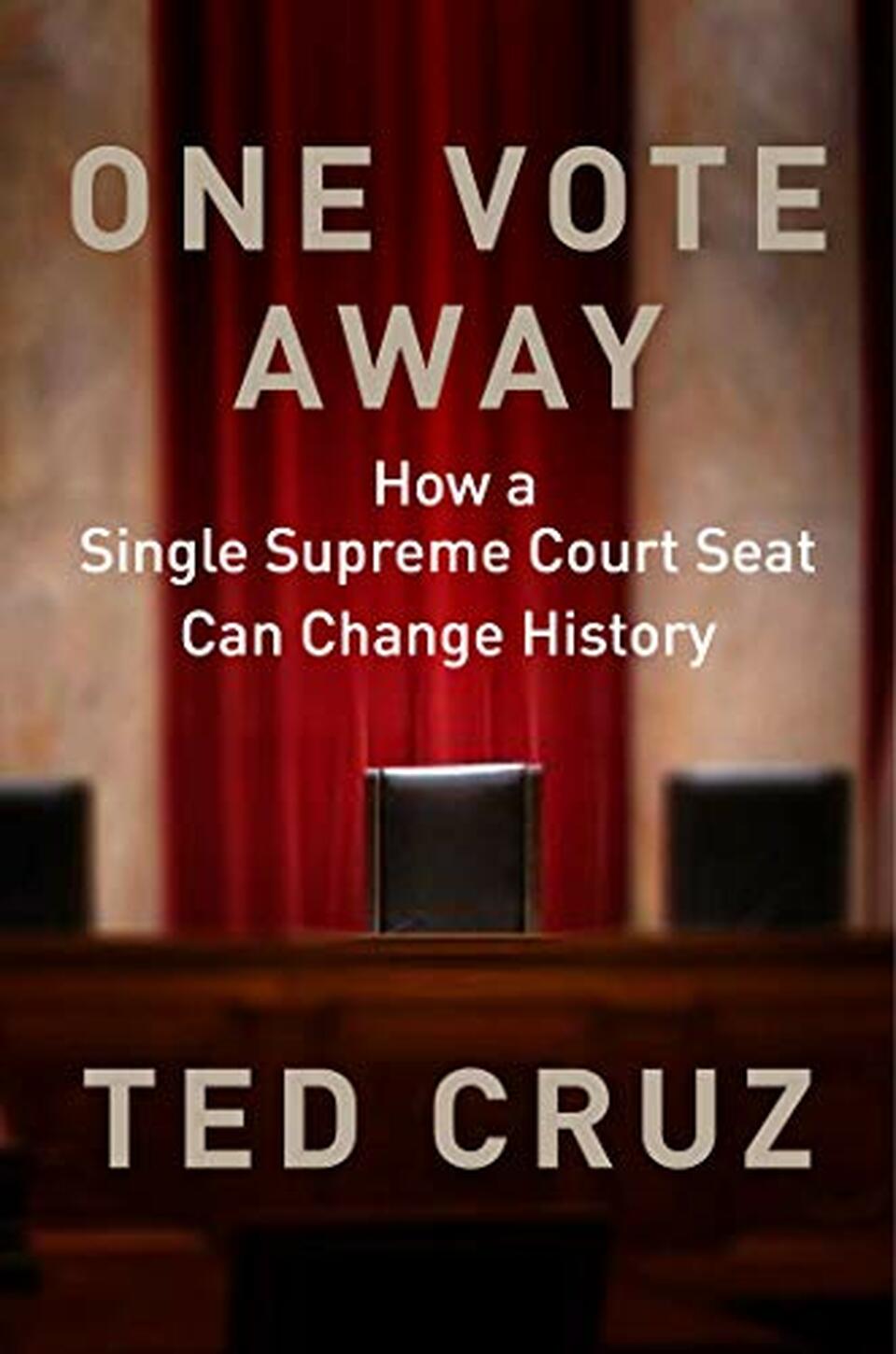 How a Single Supreme Court Seat Can Change History

Although it was written by a prominent politician, I didn’t read this month’s book, One Vote Away, because of any political leanings. I’d seen quotes that piqued my interest in the US Supreme Court’s role in preserving or eroding constitutional principles and I wanted to learn more. In focusing on a handful of key cases in which outcomes hinged on a single vote, Cruz did not disappoint.

He aptly quotes Justice William Brennan who illustrated “the most important legal principle at the Supreme Court...with a grin while holding up five fingers, the ‘Rule of Five.’ As he would say, ‘with five votes, you can accomplish anything’—no matter what the law or Constitution said otherwise,” an activist, Cruz writes, who “excelled at persuading his fellow justices to join him in reshaping America.”

Cruz knows the Supreme Court. “For nearly two decades, my professional life revolved around the Supreme Court, and it is an extraordinary institution,” he writes. “Living legends have walked those marble halls. The victories they have won for justice and rule of law—and, at times, the damage they have inflicted on our nation—have been incalculable.” I wanted to learn more about the courts Cruz, who clerked for Chief Justice William Rehnquist in 1996, and as TX Solicitor General argued a number of cases before the Supreme Court, knows so well.

In his introduction, Cruz writes that judges should apply the law, not “decide policy matters.” This went astray long ago when “activists on the far left decided that democracy was too cumbersome. It was too slow. And it was too difficult to persuade their fellow citizens that their policy prescriptions were sound and wise. So instead, they resorted to litigation, trying to get judges to mandate the public policy outcomes they wanted—even if the voters disagreed.” In deciding those matters, the Supreme Court, Cruz charges, has given itself more power than the founding fathers intended, “well beyond what it is entitled to under the constitution.”

Cruz starts appropriately with the First Amendment. Underscoring the amendment’s importance, he writes, “True political liberty, free speech, social stability and human flourishing all depend upon a robust and durable protection, under the rule of law, of our fundamental right to choose our faith.” Nonetheless, in the early 1960s the separation of church and state morphed from prohibition of a state religion to fights over prayer in school and display of religious texts and symbols in public places, Cruz writes. In Texas, an atheist sued the state for removal of the bigger-than-life stone Ten Commandments monuments so common to courthouses in the ‘50s and ‘60s. Other religious freedom cases Cruz argued show how much broader the First Amendment is than prohibition on a state-mandated religion. One case called for removal of a large cross that memorialized fallen veterans; another dealt with requiring religious health care providers to give contraception and abortion medications in opposition to their beliefs.

In the next chapter, Cruz calls the issue of school choice, “the defining civil rights struggle of our times.” While common today, charter schools and other alternatives to public schools were less well-recognized when the state held a monopoly on education. Does the state or do parents have the responsibility to bring up American children? Cruz explores. Though thin, the margin of victory in the cases he outlines was sufficient to preserve the right to choose how to educate your own children. “Four justices were prepared to strike down ... virtually every other school choice program in America, taking away the educational options and—in a very real sense—the hope of millions of kids,” he warns.

“Much that can be said about the natural right to religious liberty can also be said about the natural right to self defense,” Cruz compares as he reviews District of Columbia v. Heller. The Second Amendment was included in the Bill of Rights so citizens could “properly defend themselves and their families” he asserts. The founding fathers “sought to preclude the citizens of the country they were birthing from ever having to worry about their right to self defense — whether that right applies against a petty thief or a tyrannical government,” he stresses.

Cruz authored an amicus brief defining the individual nature of the right to possess firearms. The specific words used in the Bill of Rights, “the right of the people,” appear several times in the amendments indicating individual rights, Cruz explains. Authorization of state militias and their activities is considered a “power,” a term used in other contexts discussing actions the states are allowed, he explains. If the principle of an individual right applies to copyrights and searches, it must also apply to gun rights. Cruz also explains the role of prefatory clauses in the amendments to establish the context of the amendment.

Heller had a companion case, Parker, in which Cruz gave oral arguments before the D.C. Circuit Court. When appealed to the US Supreme Court, Cruz “took the lead for the states defending the Second Amendment,” writing an amicus brief backed by 31 states. The brief that showed “the Second Amendment also bound the state governments because it was ‘incorporated’ against the states through the Fourteenth Amendment.” He explains, “As a general matter, the text of the Bill of Rights applies only against the federal government” but incorporation has been practiced since the Civil War. Sometimes, it is politically unpopular and Cruz remembers the protests from various state attorneys general, when his brief pledged the 31 states presenting it to abide by the Second Amendment.

Because the District of Columbia is under the authority of the federal government, Heller didn’t ask the court to “address incorporation to resolve the case,” Cruz notes, but, “Two years later, in McDonald v. City of Chicago, the Court finished the journey that we had urged it to begin in Heller. In McDonald, the Court rightly concluded that the individual right to keep and bear arms is a fundamental right that is, in turn, incorporated against the states. After McDonald, it is not just the District of Columbia, but also all the fifty states and every local government that is prohibited from infringing upon our fundamental individual right to keep and bear arms,” he writes.

In another chapter, Cruz casts the abortion issue as a Supreme Court invasion into States’ rights with long-lasting, divisive results. “When nine unelected judges ... decree what is and is not acceptable on a policy as personal and far-reaching as abortion, it produces enormous social division.” He decries Roe v. Wade, writing, “Part of the genius of our Constitution’s Framers was establishing a system in which fifty states can enact fifty different standards to reflect the values and policy judgments of their respective citizens.” He predicts that if Roe was to be overturned, the decision would return to individual states, with the result that some would outlaw abortion while others allowed it.

It is an understatement to comment that the issues Cruz writes about elicit strong opinions. Discussing the Supreme Court decision in Citizens United, Cruz cites lie after lie that was put forward about that decision. The fight, he asserts, was whether advertisements for a movie about Hillary Clinton’s shortcomings were subject to restrictions on electioneering communications. Instead of freedom to advertise an unfavorable movie with a presidential campaign ongoing, the issues were misrepresented as special interests buying elections and about giving corporations the same rights as individuals. Cruz goes on to give an insider’s look at campaign politics, the wealth required to successfully run for office and factors that eliminate many candidates who would be good leaders.

Next Cruz shifts his attention to law enforcement searches, the right against self-incrimination and the death penalty. The latter, he writes, is controversial and “deeply politicized” and he roundly condemns the “gamesmanship that pervades and characterizes so much capital litigation.” Capital punishment is an issue for legislatures to decide, he stresses, and calls judicial decisions that override statutory law unconstitutional. “There is a place to deal with the highly contested issues of criminal punishment, and it’s not the federal bench.”

Much as I like Cruz, I admit that some of his opinions in One Vote Away are very opposite from my own viewpoints, but still, I appreciate the way his clear, concise arguments make me examine my own beliefs. Time to read his book is well spent.