Concealed Carry Skills and Drills
A Guide for Average People

Last month Claude Werner released his new eBook, Concealed Carry Skills and Drills, A Guide for Average People, a self-coaching skills improvement book that maps out a substantial series of practice sessions designed to bring structure and measurability to individual practice. This is a great program for the armed citizen intent on building up his or her skills with a handgun. 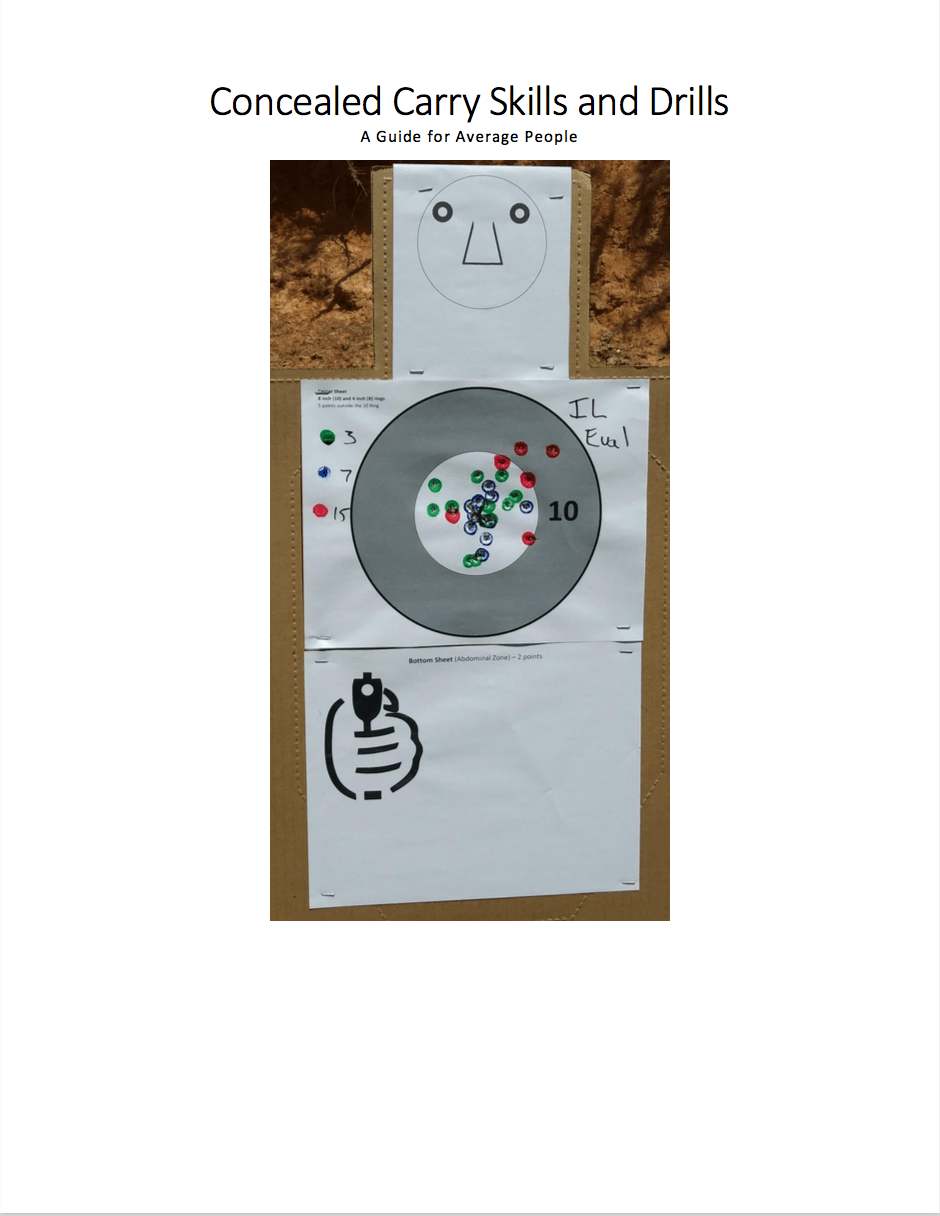 Generally, armed citizens go to training classes where instructors teach and correct errors in gun safety and shooting technique. That is great as far as it goes, but physical skills are perishable, and few maintain practice on their own as much as is really needed to maintain readiness. In his introduction, Werner explains, “What [this eBook] can do is help you to become a safer, more competent shooter who can focus your cognitive abilities on the situation, instead of the gun, during a criminal encounter. It is also an excellent reference for more experienced shooters providing informal training to new shooters.”

Werner details about three dozen various drills, the more complex building atop easier exercises, and in quite a variety of approaches, for an interesting and thus sustainable practice regimen. He focuses the practice exercises on the skills directly bearing on using a concealed carry gun for self defense. Most of the drills address several necessary skills simultaneously, especially as the progression grows more demanding.

Werner comments that, “The vast majority of Personal Protection incidents are simple, if rather frightening, events, and are quickly solved…the issue is that if an incident goes wrong, it tends to go horribly wrong…The odds are low but the stakes are very high.” He tabulated reports from the NRA’s The Armed Citizen column between 1997 and 2002, but notes that the column focuses on best outcomes, so negative consequences to the armed citizen, as well as later legal consequences, aren’t reported. From this sample, he drew lessons including:

Analyzing a sample of reports from 2017, he adds that about a quarter of the incidents reported were resolved without shots being fired, so he includes exercises including verbal challenges, drawing a holstered gun compared to grabbing a gun stored off body and reloading, all the while underscoring the necessity of safe muzzle direction and trigger finger discipline. He closes this section by emphasizing, “Firearms are remorselessly unforgiving of even the slightest lapse in attention.”

Werner suggests that training commonly approaches defensive gun use from law enforcement or military perspectives which have “radically different” mission parameters. This creates problems, he writes, because, “Aggressive action, in excess of what is allowed by law, is often illegal and almost always inadvisable.” Law enforcement is forced to focus on avoiding liability, too, he adds.

Another dangerous artifact from law enforcement training is the 70-80% acceptable passing score for qualifications, a subject Werner addressed in the lead article of this journal. Other off-range realities include knowing that self defense may not provide a backstop clear of innocent people or an unoccupied space between oneself and the attacker. Other realities discussed in Concealed Carry Skills and Drills include moving attackers at different distances, and even dog attacks that entail targets of different sizes and orientations, he explains, adding, “A small target coupled with non-threats downrange can present a difficult marksmanship problem, even at close range.”

Werner recommends viewing armed self defense through the Can/May/Should/Must lens used by attorney Steven Harris in his columns on the Modern Service Weapons website. Werner focuses much of this book on “Can” because the mechanical intricacy of gun use too easily looms so large in the mind that during an emergency the “May” and “Should” aspects of defensive gun use are eclipsed–to the armed citizen’s great and disastrous misfortune. “By focusing on CAN in practice, a degree of Unconscious Competence with the pistol develops. Unconscious Competence makes a larger portion of the user’s cognitive abilities available to deal with the situation, instead of mechanical operation issues,” he explains.

Werner gives practice drills to perfect basic skills–the foundation of unconscious competence–explaining that when armed citizens fail to hit accurately, most often a first shot hits very low. “The number of hits in the legs on criminals in actual situations is noticeable. It is less likely these result from the desire to wound than simply because of extremely poor marksmanship in the forms of not seeing the sights and yanking the trigger,” he advises. His book, as a result, puts a lot of emphasis on one- and two-shot drills.

Werner categorizes various drills into Skill Builders, Evaluations, Decision/Thinking Drills and Standards, which include both live fire and dry fire. He focuses on distances out to 15 yards in the evaluation exercises. The Decision drills, he explains, are designed “to break the shooter’s attention from the gun itself in order to look past the gun and quickly analyze a situation with a conscious mind. It is mental training. Having a conscious mind about the situation will allow the gunowner to make better decisions should a criminal attack occur,” he explains.

Werner’s first skill builder drill is untimed but performed at distances from five to ten yards and includes malfunction clearing followed by a reload without firing. Next, he recommends one shot drills to isolate the skill of sight alignment and smooth trigger press which are elemental to an accurate first shot after drawing.

Subsequent drills increase in complexity, adding clearing malfunctions, followed by verbal challenges at distances from three to fifteen yards. Two-handed shooting, dominant hand only and multiple shot drills encompass the increasing difficulty. Move then shoot, head shots, reloading, multiple targets and varied numbers of shots required come in later drills. Partial decks of playing cards introduce random responses in several drills that also include verbal challenges and drawing the gun from a holster. These “thinking” drills increase in complexity as the book continues. Time limits don’t appear in Werner’s suggested drills until page 50 of the 84-page book when marksmanship exercises add turning, then drawing and shooting a specified number of shots inside an assigned time limit.

Readers should think of Werner’s Concealed Carry Skills and Drills as a resource like an encyclopedia or a dictionary, and after reading the introduction, jump immediately to the appendices to get a good mental picture of the author’s technique recommendations, equipment suggestions, and perhaps as important as any of this material, absorb the Negative Outcomes section that heralds a loud warning about gun use without adequate training, without the necessary serious mindset and without knowing prevailing law.