You DON’T have to have a friend or relative introduce you to shooting. If you want to go buy a semi-automatic handgun, you can go out to the range, get instruction, and then you are off to the races. From my personal experience and knowing the experiences of some of my friends, I think it takes them a little time to come around to the realization that maybe they’d like to have a gun for self defense.

eJournal: The shift to owning self defense guns is a serious decision and coming to terms with deadly force issues can be difficult.

Gresham: I have a head start thinking that way because of my dad and GunTalk Radio. For a lot of people, especially people in their 20s, they don’t see or understand a need for self defense. I think once you get married and have children, you have a house that you care about, then you have more things that are important to you. I think you start thinking about defense differently. You say, now I need to provide protection.

In a way, it is almost like life insurance. Most people who are 24 years old could never envision a need for life insurance, and might say, “Why would I spend money on life insurance? This is silly!” But all of a sudden, you are 32 and you have a house and a wife and a child, and you say, “Hey, I have some responsibilities here. I need to protect and provide for my family.” Life insurance and gun training is really the same thing, when you compare it that way.

I have friends who ask me, “You know guns. I’m thinking about getting one. What kind should I get?” And I tell them that there are a lot of different options for guns and a lot of good options that aren’t too expensive, but first you really ought to go get some training. Spend a day or two with a good trainer before or right when you get your gun. 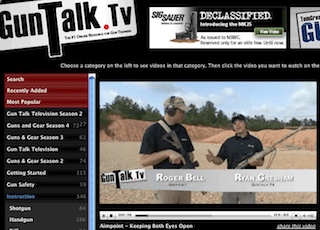 Above: You can enjoy a lot of introductory programming hosted by Ryan Gresham at www.GunTalk.TV or better yet, subscribe to get all of the programs.

eJournal: How is this age group’s earning power? Is $500 for a three-day class an expense they really, really cannot fit into their budget? Or is it simply a matter of having different priorities?

eJournal: Crime in general has been declining for several decades, but at the same time, we’ve seen a number of highly-publicized attacks that raise concerns about personal safety. In light of current conditions, what kinds of violence do younger people fear?