A few months ago when I asked our Network Affiliated Attorneys if they had published any books or authored any DVDs, I expected information about books dealing with various state gun laws, and as our book review last month showed, some of those resources did, indeed, surface. What I did not expect was the rollicking autobiographical volume penned by Anchorage attorney Wayne Anthony Ross entitled, Courtrooms, Cartridges, and Campfires.

This affiliated attorney’s story was such a charming diversion that instead of dealing with the serious subjects we usually discuss in this column, I want to share some of his life story with our readers. Ross acknowledges the influence of his family and his faith in his book’s opening chapters that portray a young man determined to earn a law degree and willing to work not only the hours needed to master the academics, but even longer hours working at a variety of service jobs to pay for the education. He introduces his father and other family members, his wife (who sadly has died since his book’s publication), and memorable college professors. The latter included a torts professor who drilled his students to explore questions from the viewpoint of the reasonable man. Ross and his fellow students, convinced that the professor disproportionately targeted him with that question, hung the nickname “The Reasonable Man,” on young Ross.

A lifetime outdoorsman and firearms enthusiast, Ross peppers his autobiography with tales in which handguns, rifles and shotguns play a role. After neighborhood acquaintances trekked to Alaska on hunting and fishing adventures, their reports planted seeds that eventually drew the author North. When a law school professor cited a case decided by the Alaskan Supreme Court, Ross decided then and there that he wanted to practice law in Alaska. 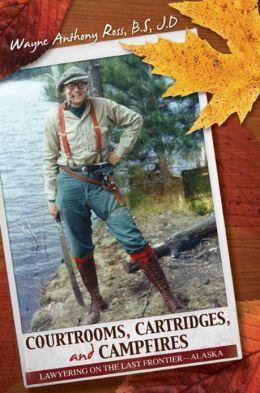 At the end of his junior year of law school, he sought but did not win a law clerk position and had abandoned his dreams of going to Alaska until a fellow student asked him if he wanted to drive with him to Alaska to seek summer work.

Making that exploratory trip, the author learned the hard way that Canada–even the Canada of the late 1960s–had no love of private handgun ownership. Arriving at the border, he declared a .22 kit gun and a .45 Colt revolver, only to be told that the province of Saskatchewan would not allow him to transport them. The guns were shipped and waiting for him when, after more than their fair share of adventure, the young fellows arrived in Anchorage in June of 1967. Imagine Ross’ delight upon landing a law clerk position, despite a rate of pay that only afforded him a basement room shared with his driving buddy.

Already courting his future wife, Ross wrote to her of his adventures and his growing love for Alaska. In one, he enthuses, “I like freedom, and in the wild places here I feel unrestrained. I like solitude, and here it is attainable. I like an unhurried pace of life, and not the ‘rat race’ type of existence found in Milwaukee. I like the mountains, trees, and ever-flowing water. I like the abundant wildlife. I like the clear fresh air. I like to feel a part of something that is growing, and not stagnating like Milwaukee. I feel closer to God here.”

The couple married after his graduation from law school the following year, and immediately drove to Alaska where Ross began searching for a job in his chosen field. He found work with the Attorney General’s office, and went on to serve as a family court judge. Stories about his employers and cases are entertaining, and not surprisingly the frontier lifestyle still present in Alaska in the late 1960s often included firearms.