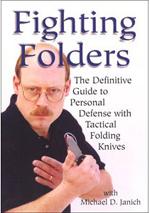 When interviewing Michael Janich recently I asked which of his considerable number of books and DVDs would provide the best foundation for ordinary folks wishing to better understand the defense use of folding knives. Fighting Folders was his unhesitating response, so as a companion review to this month’s lead article, we will study that training program.

Fighting Folders explores knife model options, how to get a folding knife open and into action quickly, plus Janich’s techniques to maximize what he calls this “potent weapon.” Concerns highlighted include knife carry for a predictable orientation and quick accessibility and positive, one-handed opening methods. In addition to using the thumb holes or studs common on folding knives, Janich explains gripping the flat edge of the knife blade, snapping the wrist, and letting inertia open the knife. This method relies only on gross motor skill, so is supported by research showing that under stress, the human is much better equipped to execute large movements instead of small ones. For the inertia opening, it is important to hold the knife at the pivot point, and put the entire arm behind the task, Janich demonstrates.

Do inertia opening knives run counter to laws prohibiting gravity knives?” Janich asks, quoting the common language forbidding knives that open with a “flick of the wrist. He does not think so, because, “You can take me into any knife shop anywhere in the United States or anywhere else, and open 95% of all the knives in there with a gravity opening.”

He compares the practice required to attain this skill, to that of exhibition shooters who can fire even single action revolvers at tremendous speeds. Naturally, that does not make a single action revolver into a submachine gun, and in the same way, he concludes, ability to open a knife using inertia shows hard work to develop an extraordinary skill, but does not change the knife into a gravity knife.

As Janich further explores opening technique applied to various knives, he urges use of training knives with dulled edges and rounded tips. The likelihood of being cut during opening practice is very real, he stresses. While some train with castings of knives that are already open, that sacrifices opening practice, he explains.

The goal, of course, is to get the knife opened and into the grip taught by your style of knife use. He demonstrates several common grips before moving on to discuss knife carry and draw methods. Janich prefers clipping the knife to the top of the trouser pockets, because it is easy to just tuck the thumb inside the pocket with the hand’s fingers on the outside, covertly in position over the knife, concealing it from view and ready to deploy if needed.

Janich points out dangers of carry modes that require a lot of adjustment of the hand on the knife to get it into use, adding, “Combine access, draw, opening and application into one fluid series of movements,” clarifying his preference for tip up pocket clip carry to limit how much the knife has to be moved to attain the grip. In addition, the knife should also be accessible to the weak hand, Janich demonstrates, stressing that carry location and method needs to be consistent throughout all of your modes of dress. If you wear trousers without pockets, for example, move the carry location to the waistband and carry it there consistently.

Grip is a critical element in using a handheld weapon, Janich stresses. A good knife grip is one that allows you to hang on to the knife during the fight, permits effective cutting and thrusting, and does not shift under impact. Too many knife styles just practice the strokes into empty air, so the practitioner has little idea of the impact involved when the blade contacts the assailant.