America’s Race to Convict and Its Impact on the Innocent
By Daniel S. Medwed 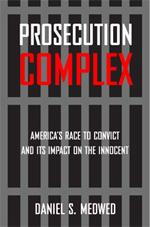 Daniel S. Medwed, nationally recognized scholar in the field of wrongful convictions, has written a detailed and disturbing book explaining how wrongful convictions occur. Medwed works with the Innocence Project and was associate director of the Brooklyn Law School’s Second Look Program while a professor there. Despite the good work done by these volunteer groups, stumbling blocks to overturning convictions are staggering and so Prosecution Complex outlines reforms to prevent injustices. Medwed breaks his analysis of unjust prosecutions into three segments–case preparation, trial, and post conviction.

Medwed’s criticisms focus on police investigators, prosecutors and district attorneys, unreliable laboratories and experts, plea-bargains, juries overawed by forensic evidence and a system of toothless sanctions against prosecutorial misconduct. Prosecutors and a system that does little to restrict them come in for the lion’s share of criticism. “Prosecutors are the most powerful players in the criminal justice system, capable of determining who should be charged and with what crimes,” Medwed writes. There are checks on prosecutorial power, like requirements to turn over exculpatory evidence before trial, but he charges that, “courts and ethics committees seldom punish prosecutors for violating them.” The problem, of course, is that prosecutors are human, with competitive drives to win, tunnel vision when interpreting evidence, and naturally a little blind when reviewing questionable convictions they’ve won.

When deciding to charge an individual with a crime, the prosecutor need only “believe the person more likely than not committed the crime,” Medwed explains. This decision need not consider the defense’s claims and even may be based on court-inadmissible hearsay.

He suggests requiring prosecutors to consider exculpatory evidence and raising the charging standard to proof beyond a reasonable doubt to “weed out borderline cases and spare some innocent suspects.”

Why would a prosecutor try a shaky case? Prosecutors develop tunnel vision when reviewing police reports focused on a single suspect because they are not shown a full police report that may include other suspects, the author explains. He recommends requiring police to disclose complete case files to prosecutors. Review committees, to whom prosecutors must explain charging decisions, are needed, he continues. Retired prosecutors and judges with little to lose by challenging mistakes would be best suited to serve, he explains. To avoid overload, these committees could limit oversight to cases where “the risk of wrongful conviction is most pronounced,” writes Medwed, including “possible eyewitness misidentifications, false confessions, unreliable informants, or tenuous forensic findings.”

Once charges are filed and the case is moving toward a trial, the prosecution labors under discovery rules, including requirements to divulge exculpatory evidence. Enforcement is somewhat toothless, though, and even if a judge grants a new trial because the case was materially harmed by the prosecutor’s failure to disclose the evidence, the offending prosecutor is rarely identified by name or sanctioned. Medwed suggests harsher punishment for Brady violations (See Supreme Court decision Brady v. Maryland http://www.law.cornell.edu/wex/brady_rule), including the possibility of disbarment for blatant violators or at least overturning verdicts without opportunity to retry the case. Better yet would be internal case monitoring committees, or requiring prosecutors to share all information bearing on guilt or innocence with the defense, he contends.

One stage at which the prosecution and defense do talk is when a plea bargain is offered. Medwed asserts that in more than 95% of criminal convictions the defendant pleads guilty to a lesser crime than the one originally charged. He colorfully describes plea-bargaining as “a marketplace where the defendant barters his right to a jury trial and the government its right to pursue the highest sentence possible.”

Why would an innocent person participate?