In your capacity as Executive Vice President of the National Rifle Association (NRA), you are not only the “face” of the NRA but also its de facto leader. I acknowledge the NRA board members and officers, including a new elected President, but it is you who either sets the agenda for the NRA or carries out the Board of Directors’ policies. It is with this in mind that I address this open letter to you through the Official Publication of the Armed Citizens’ Legal Defense Network, Inc. (ACLDN). 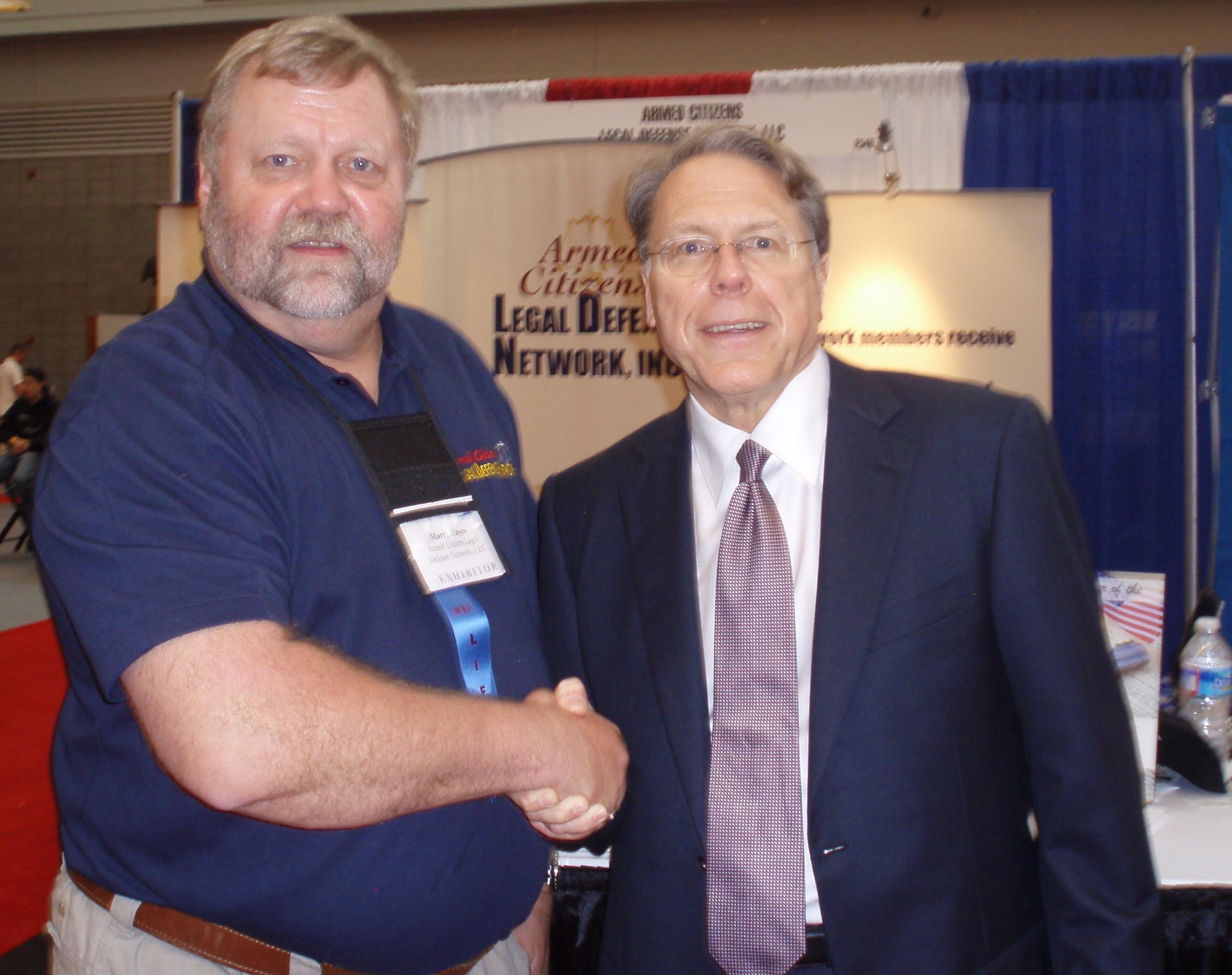 You see, at one time you seemed to welcome entrepreneurs such as myself at the NRA Annual Meeting (see accompanying photograph where you stopped by the ACLDN booth in 2011 and thanked us for attending). Now, the NRA’s recent plunge into the self-defense insurance market with the Carry Guard product would seem to indicate a change in direction for the NRA. This alters the NRA from being a member-driven organization with a primary mission to provide gun safety training to armed Americans and fighting for Second Amendment rights as you describe at https://home.nra.org/about-the-nra/, to selling products and services (NRA Carry Guard) in direct competition with many NRA members, myself included.

You see, Mr. La Pierre, I attended the NRA Board Meeting on Monday, May 1, and listened to you and NRA Executive Director Josh Powell both explain to the Board and members in attendance that this recent move was purely for monetary reasons. In fact, the buzzwords you were using were: “Modernizing the financial underpinnings of the organization,” which apparently means competing in the market place against current NRA members.

After the Sandy Hook massacre, I was proud of you and the National Rifle Association for publicly standing up and saying, “The only thing that stops a bad guy with a gun is a good guy with a gun.” I was so proud in fact, that I upgraded my annual membership to a life membership, and the Network became an official NRA recruiter. Throughout my 30-plus years in the firearms industry, I have always been an NRA member and promoted membership at every opportunity. I still believe every gun owner should be a member, but I can truthfully say that I am not as passionate about it as I was just a few short weeks ago.

I don’t know who convinced you and the rest of the executive board that starting Carry Guard was a great idea that would result in a windfall of money for the NRA, but that person or persons should be fired! Why? Because convincing you that this was a good idea, has angered hundreds of thousands of pro-gun armed Americans, specifically armed citizens who have already subscribed to one of the many after self-defense help plans already in the marketplace like the Armed Citizens’ Legal Defense Network, Inc.

In fact, when ACLDN members stopped by our booth at the 2017 NRA Annual Meeting, many asked us about the NRA Carry Guard. Trust me, they were not happy and they could not understand why the NRA would do this. But, in addition to these rank and file members, there are hundreds of other pro-gun NRA members who work for the companies against which you are now directly competing in the marketplace. These men and women are wondering about Carry Guard’s long-term ramifications for their jobs and livelihoods.

I am not personally worried about the NRA Carry Guard negatively affecting our business. We are strong enough and have a history of good business practices such that the thousands of ACLDN members are not going to drop us to join Carry Guard. Our members are smart enough to have done their homework a long time ago, and came to the conclusion that membership in the ACLDN was in their best interests. Frankly, once those who have signed up for Carry Guard start exploring the rest of the industry and studying the various plans available, they will likely move away from Carry Guard to a better product, too.

I am also extremely disappointed that the NRA has spent the hundreds of thousands, or even millions of dollars rolling out the Carry Guard campaign, with its paid endorsements and puffery-filled advertising, instead of investing that money to build up the NRA’s strength to fight the next Michael Bloomberg sponsored attack on our Second Amendment rights. You see, I live in Washington State, and a couple years ago we could have used some of that money to fight Initiative 594, the “Universal Background Check” initiative paid for by Bloomberg. In fact, at the Board Meeting you specifically brought this up as one of the reasons the NRA needed more money. Well, perhaps if we could have defeated I-594 with more help from the NRA, then we wouldn’t be fighting the same fight all over again in other states. But I digress.

The insurance aspect of Carry Guard is not the only reason I am dissatisfied with you and the NRA. As you know, part of Carry Guard is firearms training, to be started this month. And, as the President of a 27-year old training company, The Firearms Academy of Seattle, Inc., I have been teaching basic to advanced handgun, rifle and shotgun classes for civilian self defense for nearly three decades. To me, the notion that you could gather a handful of ex-military operators to teach private citizens and title that training as the “Gold Standard” is laughable, but that is exactly what is done at https://www.nracarryguard.com/training/.

Again, on this second front, I have to view the NRA as a competitor. Be assured that I will not be helping my competition succeed. I suspect the 400-plus Network Affiliated Instructors who teach law abiding armed Americans across the country the nuances and skills necessary to carry handguns and survive violent encounters also feel the same way. How much of the money that NRA members donated to further the pro-gun cause has gone towards this inept attempt at civilian firearms training? It’s not like the need for firearms training is not already being met by a vigorous firearms training industry.

So, where does that leave you and me, Mr. La Pierre? First, I am still a Life Member of the NRA, and expect to continue my membership. But, as far as actively recruiting members for an organization that is now competing head-to-head against my two companies, I will have to pass. In fact, on behalf of the Network, I have already pulled out of the recruiter program and will remain on the sidelines as long as the NRA continues down this path of competing directly against its very own members.