Spotting Danger Before It Spots You

At least once a year, I like to refresh my threat detection skills, get input on emerging risks, and learn some new ways to make decisions based on all the visual, audible and the more subtle inputs our busy world provides. After all, what good is any of our skill training if we don’t see danger before it strikes? In September, I turned to Gary Quesenberry’s Spotting Danger Before It Spots You and liked its phased learning and workbook approach. 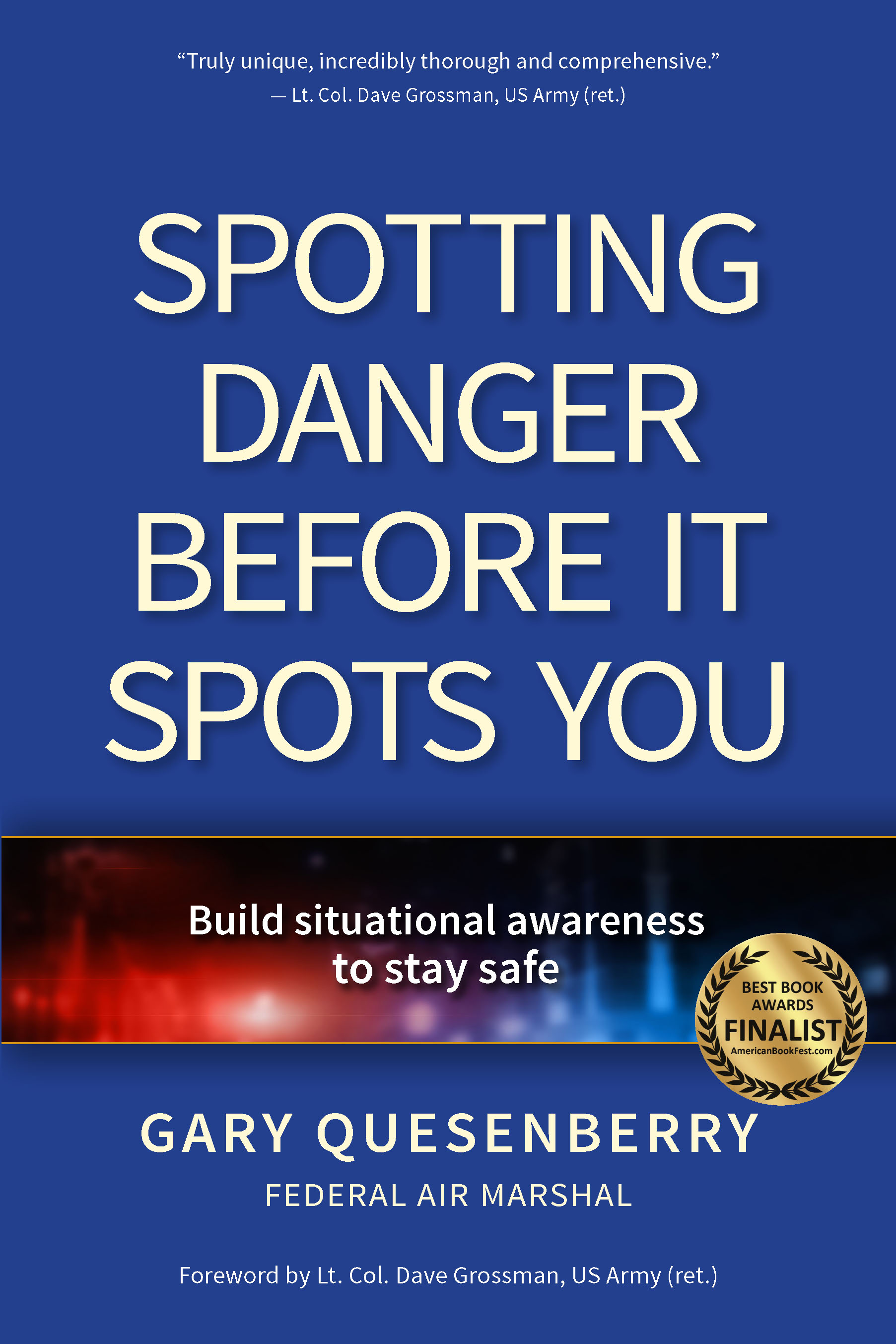 The book’s author, Gary Quesenberry, introduces situational awareness as, “the ability to identify and process environmental cues to accurately predict the actions of others.” An Army veteran, he became a Federal Air Marshal after the 9/11 attacks, a career move that furthered his study of violence and predatory behavior. Now retired, he draws on his background in domestic and foreign counter-terror training in his books and curriculum.

Quesenberry’s “system of situational awareness will help improve your general understanding of how, when, and where violence occurs” intended to “increase your chances of successfully detecting and avoiding danger no matter where in the world you may find yourself.” We must move beyond “preconceived notions about what constitutes a danger,” he writes, if we are to “accurately anticipate the actions of others.” He identifies money, ego, territory, and emotion as the leading motivations behind criminal violence, stressing, “it’s crucial that you have a good idea as to why you may be targeted” in order to “accurately identify and correct your own vulnerabilities.”

“Target selection,” Quesenberry estimates, can take as little as seven seconds during which the predator assesses a victim’s confidence and alertness revealed by posture, gait and other body language. Predators choose targets based on perception, risk, observable value, and defenses. Would attacking you be risky? Most criminals will take pains to avoid getting hurt. Do your valuables (purse, computer, phone, jewelry and other things) justify risking an attack? He doesn’t advocate driving a ratty car or dressing down, but suggests, “if you have anything of value on your person that’s visible to others, it’s a good idea to display more outward signs of security by moving with purpose, minimizing your distractions, and staying alert to your surroundings.”

We’re often told to stay alert and Quesenberry gives “how to” advice, including comprehension, planning, intuition and visualization. He explains that “Experts often remind us that ‘the body will not go where the mind has not been,’” stressing the importance of visualization, sometimes called mental rehearsal. He compares mental preparation to chess, in which predicting beyond three or four moves increases possibilities to “millions of possible reactions...Much like the beginnings of a violent encounter, it can be overwhelming. Now imagine being able to look at the board before all of that chaos and map out a solution that would always improve your chances to win. That is situational awareness: the ability to fully comprehend a situation before the first moves are made and plan your solutions well in advance.”

He teaches recognizing and evaluating baselines so our preconceived notions about appearance, gender or ethnicity won’t blind us to threats. “We live in a world full of patterns, and we all have a pretty good idea of what is considered normal in the areas we frequent. One of the most critical factors in good situational awareness is understanding these standard behaviors and being able to spot the things that fall outside of the established baseline,” he writes, then teaches how to scan and decide what’s “off.”

How can you determine if an unusual situation is dangerous? “To form a basis for action, you need to understand that just one unusual behavior isn’t enough,” so only one element out of place requires you to pay closer attention, but not necessarily react. If three or four elements arise together “your best bet is to remove yourself from the situation and alert the police,” Quesenberry explains. Being able to articulate multiple factors that alarmed you justifies a response, reduces indecisiveness, as well as providing explanations required if you use force against another person. He later points out that not all baseline disruptions are malign. Someone following you may be returning something you dropped – or maybe not.

Invest the effort to learn the baseline for “normal” where you are and be alert to normalcy bias that can blind you to danger. Did something distract you? Stop, recalibrate, and analyze your surroundings if you’ve slipped into unawareness, he writes. Engage your creative side with what-if mental rehearsal and visualize various options you can exercise. Later, he teaches “counting” games to stay plugged in. Entering a new room? Count and identify the exits; count the people inside while watching their hands. On the street, count the people who appear to watch you use a cross walk; count the numbers of people sitting in cars; how many of those cars are running?

Scan for what’s out of place and pay attention if there are deviations. If something unusual crops up, make it the subject of a mental rehearsal “what if” game that addresses avoidance, de-escalation and confrontation, the options to which you may resort if the abnormal turns out to be dangerous. “The more you practice these steps the more natural they become. Over time you’ll notice that you’re taking in more information faster, and without even thinking about it,” he encourages.

Physiological cues of impending attack include –

Predators also give off predictable hints which he lists as –

“Pay attention to your intuition,” is common advice. Quesenberry suggests that people ignore danger signs “because it’s too hard for us to cognitively connect the dots between what we see and the risk that lies ahead.” His plan of action?

Better still to never be selected by a predator! Quesenberry teaches ways to blend into the crowd. Be polite, and smile when appropriate but avoid small talk. Mimic clothing choices appropriate to the locale, carry yourself “like you know what you’re doing and where you’re going even if you don’t,” he writes. Orient yourself and study the map in advance. If working with unfamiliar foreign currency, organize your money ahead of time so handling it doesn’t distract you in public.

Move with the crowd instead of isolating yourself at the edge, he advises, compromising instead “between the outskirts of a room or group and the dead center, [where] you’re giving yourself a buffer from those direct-center attacks while maintaining your anonymity and proximity to possible escape routes.”

Escape techniques include diverting the attacker’s attention away from you, putting obstacles between you and the danger, and knowing locations of and routes to safe spots. Did escape fail or is it impossible? De-escalation is Quesenberry’s next topic. Communicate from a safe distance, out of reach but close enough to exude respect and empathy, projecting confidence but not trying to intimidate. Allow the attacker a way out. Watch for subtle changes in body language and watch your own body language to keep it congruent with your message. Did it work? Disengage and leave.

Did it fail? If escaping is not an option, a successful counter needs surprise, speed and aggression, Quesenberry summarizes. A chapter titled Reinforcing Your Defenses gives instruction on how to “improve your mindset, learn to minimize distractions, control fear, and build confidence through practice and understanding.” No one wants to consider failure, but he insists we study its cause – failure to prepare – and accept errors as important lessons from which one moves on and builds stronger defenses. “Your level of success in life will be directly proportionate to your ability to learn from your mistakes, so never be afraid to fail.”

Build self confidence by increasing your “knowledge of how things work,” he continues, repeating that self confidence is a leading reason predators de-select some and victimize others. Another aspect of genuine self confidence (not bluster) is acting without hesitation. An element in decisiveness is a thorough knowledge of the skill and its ramifications, like use of force law. Quesenberry writes, “Take it upon yourself to become an expert in the federal and state laws that govern the use of force in your area. Always stay up to date on local and governmental changes that affect those laws. Confidence in your understanding of the law removes a substantial psychological hurdle when it comes to taking decisive action.”

Quesenberry’s closing chapter will make a great periodic review for people across the spectrum of training from those just getting interested in ways not to fall prey to violent crime up to lifetime practitioners of awareness and those skilled at various self-defense methods. He writes candidly about the problem of complacency and how to stay sharp. By breaking down self-assessment as well as honest consideration of locations we go to and mental exercises that are fun ways to remain alert, Spotting Danger Before It Spots You encourages habitual awareness.

Quesenberry concludes, “Awareness is a state of mind; it’s a way of living that has to be cultivated, not only in your own life but in the lives of those you care for...The ability to keep yourself safe during a violent encounter is not based on some internal superpower that shows up when you need it. Success is based on your mindset and your willingness to practice what you have learned.”