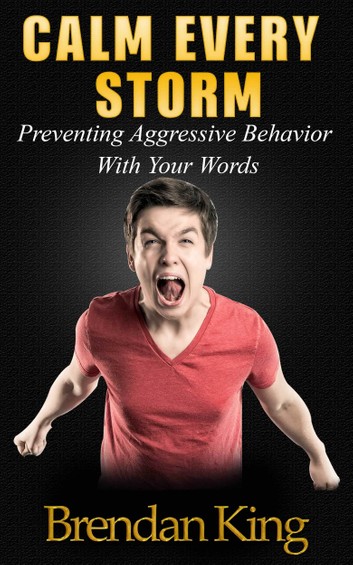 Preventing Aggressive Behavior With Your Words

“I didn’t do anything! He just went off on me.” A lot of interpersonal conflict could be avoided if we were better at recognizing how our words and actions elicit what seems to be out-of-proportion reactions. I am always interested to learn how to better disengage, how to avoid increasing an upset person’s likelihood of lashing out, and in that study, to uncover unconscious behaviors that escalate instead of calming.

The titles of two books by Brendan King, caught my attention this month, and while written from the perspective of a policing and mental health workers gave a number of insights into how verbal and non verbal communication can calm or enrage a potential attacker. I first read King’s more recent book, The 15 Fundamental Laws of De-escalation but it was his earlier book, Calm Every Storm, that contained gems of experience that address de-escalating people in crisis, lashing out and hurting themselves or another person. It also addresses a lot of professional development issues for professional first responders, so not every chapter directly covered de-escalation. Enough material was directly applicable, though, that I’d like to highlight King’s strongest points in this review.

Some of our community of armed citizens believe standing unyielding and uncompromising is superior to negotiating to reduce hostility. In many situations, that only escalates tensions and leads to violence. King, writing in short chapters titled by old advertising jingles, starts by selling the value of de-escalating. “In order to successfully de-escalate somebody in crisis, you first have to identify what’s in it for you, weighing the best case and worst case alternatives, and deciding deescalation is worth it,” he writes. “Secondly, determine why should you try to de-escalate the situation? Thirdly, what do you have to gain by not ignoring it?”

Having decided to try to lower tensions, if only to earn a window to escape, you have to demonstrate you’re not a threat to the potential attacker, King writes, acknowledging that not all readers will agree. “If the other person perceives you as a threat, be it verbal, psychological, or physical, the reality is their anxiety is going to increase. They’re already in crisis, and you don’t want to make it worse by demonstrating a threat before it’s required. Too often that power and threatening body language, tone, approach, etc. is used as the first approach,” he warns.

“You don’t have to come off as Mr. Tough Guy with the mentality that people had better do what I say, or else. If you’re confident in your abilities, and your skills, you know you have the ability to go hands-on if you have to. Using the loud authoritarian approach isn’t always necessary. Saying things like, ‘I’m not going to ask you again,’ or, ‘Hey, you better step back and calm down, or else!’ ‘You can do this one of two ways, the easy way, or the hard way!’ often only results in the ‘or else.’”

Instead, “find an in” with a person in crisis and demonstrate that you’re not a threat, King writes. In his experience, he says, “I’m going to try to redirect them away from how angry they are at whatever the situation is you’re dealing with, identify something where that person and I can relate, and build a small bit of rapport in those few seconds.”

Can you offer compromise on one area of conflict to get a result that increases safety? King writes, “I’m going to give somebody something if they’re asking me for it, because they’re in crisis, and they’re yelling at me to ‘Get out my face’... whatever they think they want in the heat of the moment. I might give them one of those things they think they want, but I’m not going to give it to them without getting something that I need in return,” be that stopping yelling, breaking off without violence, or what ever resolves the conflict. “Basically, I tell them what I am willing to do for them, and I explain what I expect from them in return.”

Armed citizens rightly pursue training for lethal force skills. Learning people management skills is of equal or greater importance. Lest readers worry that Calm Every Storm is weak on personal safety or puts those who employ its lessons at risk, having read and pondered its pages, I concluded it is balanced between options to prevent an agitated person from acting out violently weighed against choosing to apply force immediately. There is a lot of human interaction that has to be handled between those two extremes!

When engaged with a person in crisis, King warns against losing your broader danger scan to tunnel vision. If more than one person is present, focused effort to deescalate conflict with one creates risk if an onlooker or member of the group jumps into the fray. “Make sure you stay alert, you keep a high sense of awareness, and you’re cognizant of not just the individual in crisis, but other surrounding areas, as well. The, person in crisis might be just causing a distraction, so the real crisis can happen behind your back,” he warns.

Have reasonable expectations and understand that the disturbed person isn’t necessarily going to like the options you offer. A person with a weapon may not be willing to drop it, he comments, but you may be able to get them to lower it until you can move to a safer position. De-escalation relies on salesmanship, King writes, repeating the essential role of empathy and listening skills coupled with asking questions to reach a safe outcome.

King also addresses maintaining emotional control when verbally abused, determining when de-escalation is failing and violence is imminent, doing the right thing and having confidence in your own decisions. “One of the most difficult, yet powerful tools you can develop in your de-escalation arsenal is to learn to separate yourself” from reacting emotionally to another’s words or actions, he urges.

Crisis intervention is not just for first responders! King writes, “We all encounter conflict of some type outside our workplace. We have conflict at home, with family, with kids, maybe even with friends...Any opportunity to build your crisis intervention skills is only going to benefit you.” I agree! I read a fair number of books that aren’t entirely applicable to how I live or what I do and I take away useful information. Calm Every Storm teaches how first responders deal with conflict and although outside that line of work, I found it packed with techniques and advice to borrow for every day life.