Studying crime reports is one of the best ways to encourage “what would I do if…” questions to hone mindset, readiness and self-defense skills. I’m a big fan of true stories about men and women who fight back against violent criminals. A few weeks ago, a Network staffer showed me a book he’d read over the weekend that was coauthored by Robert A. Waters, whose earlier work I reviewed in this journal in August of 2010. I downloaded his new book and started reading the same day. 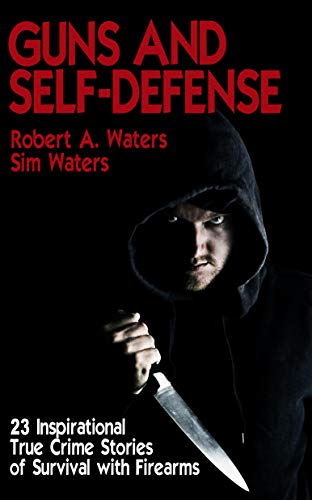 The authors of Guns and Self-Defense introduce their stories by observing that “about 17,000 Americans are murdered annually. First responders rarely reach a crime scene until after the fact. U.S. courts have ruled that it is not the duty of police to ‘protect’ citizens. For this reason, many Americans keep firearms in their homes or carry guns on their person.” Their book avoids politics and questions of constitutional law, focusing instead on violent criminals, their evil deeds and how ordinary men and women used guns to avoid being seriously injured or murdered. As the co-authors explain, none used guns in defense of property.

I was struck by how many of the victims or their loved ones were injured before shooting to stop their attackers. One case in point is the authors’ story of an elderly man and his wife who found an intruder in their home when they returned home from an outing. Both were shot in an exchange of gunfire, but they killed the intruder and the man was able to call for medical intervention that saved their lives. Others were brutally beaten or suffered knife wounds before shooting the attacker.

Most of the criminals shot were repeat offenders. Drug use and to a lesser degree drunkenness are often present in the attackers’ profiles in these stories, and quite a few of the crimes are by teenaged gang members. That was the situation when four teenagers planned to invade and steal from a marijuana dispensary in WA State, but became confused about the location and instead broke into a 60-year-old couple’s home. After demanding the “weed, money and gold” from the man at gunpoint, the robbers realized that this wasn’t the pot dispensary and began demanding jewelry and money. They restrained the couple with an electrical cord, threatening to shoot and kill them. Finding no gold or marijuana, the teens took a little jewelry then left abruptly, but broke back in to retrieve a backpack containing their stolen goods and cell phones. The homeowners had freed themselves, called police and gone to their bedroom for a loaded pistol when the teens burst back in. After one was shot, the teens fled again.

The book relates a similar FL case. A gang of about 15 convicts and parolees became convinced a home was occupied by drug dealers because numerous cars were frequently parked outside. One gang member claimed the residents had $90,000, anticipating that they would be rich if they stole it. A violent invasion ended in the death of the instigator, but not before the grandmother living there was crippled and her husband suffered a head wound while their grandson cowered in his bedroom and prayed.

Teenaged criminals figure prominently in the stories told, including an attack by two teens and a 24-year-old against a wheelchair-bound man, who is missing both of his legs. When they forced his front door open, the resident began shooting when the intruders tipped him out of his wheelchair and onto the floor.

Some of the defensive shootings were to protect others, like the shots that saved the life of the AZ Highway Patrolman who was badly injured before a motorist saw “a state trooper lying on his back while an assailant straddled him, punching him over and over.” The motorist hesitated only long enough to move to an angle that would miss the downed officer and then he shot and killed the attacker, Guns and Self-Defense reports. The good Samaritan who saved the patrolman’s life had had his rights restored after losing them some years earlier in a felony theft conviction.

In a similar incident, a FL sheriff’s deputy pursued a speeding motorist who was pointing a handgun out of his window. Stopping abruptly, the assailant, who was in the throes of a psychotic break, ran back and tackled the deputy before he could get out of his car. The assailant was getting the upper hand when an armed citizen shot and killed the attacker. The citizen heard the deputy calling out for help and saw him trying to keep his gun secured. He explained that although a number of people witnessed and video recorded the assault, none tried to stop the attack.

About a third of the self-defense incidents reported involved multiple assailants. In one, a young mother and registered nurse fended off two assailants as she arrived home at 1 a.m. They demanded her keys, but she feared they’d harm her children who were asleep in the house. In her other hand, she protected a zippered pouch containing her gun. When one attacker went to their car to get a gun, the woman was able to get her own gun out and shoot the other teen who was still fighting with her. The previous night, the youth she shot had shot a man in a carjacking attempt. The investigation following the nurse’s defensive shooting led to arrest and conviction of the youth and several of his accomplices.

Home invasions aren’t always about theft. In one of the Guns and Self-Defense stories, renters in an apartment building endure repeated threats and assaults by a deranged, fellow resident. The final assault was videotaped when a man renting one of the units recorded video to show the landlord in hopes of getting some relief. Instead, the video showed a shooting after the front door was kicked down and the neighbor barged in brandishing a machete. Another resident of the building had just chased him out of his apartment.

The armed citizen explained, “Everybody has the responsibility to take care of themselves and their family, and everybody needs to take that with the utmost responsibility because government or police are not going to be able to be there to do that for you.” He explained that the intruder fell to the floor after being shot three times, after which the armed citizen consciously stopped his counter attack. He had read that justification to use deadly force ended when he and other innocent people were no longer in danger of being killed or crippled and he acted on that knowledge.

The county prosecutor commented, “This is the perfect example of your legitimate right to defend yourself in your home from a violent intruder...Mr. Thomas asked why the occupant shot him and the occupant said, ‘I thought you were going to kill me.’ And Mr. Thomas said, ‘I was.’”

While gun model and caliber used are generally included in the stories, specifics about ammunition are not. While the numbers of criminals surviving the gunshots cannot be attributed entirely to caliber or poor marksmanship, the savvy reader will pay attention to where the attackers were wounded in the gun fight. In one story, a home intruder died after being shot with a .22 and another home intruder paralyzed by a .22 lodged in his spinal column. In others, shots from .380s deter criminals enough that they ran away but were later picked up by police with gunshot wounds to their legs and buttocks.

Many of the intended victims called police for help, battled their attackers hand to hand and were injured before resorting to shooting. In one chapter, the authors contrast a six-minute police response with a nearly 20-minute wait for police. In both, women hide in their homes while criminals break through doors, told through the transcript of their calls to 9-1-1.

I’ve enjoyed Robert A. Waters' writing in years past and I would like to see it continue. Visit his website at http://www.robertwaters.net and if you like this kind of information as much as I do, join me in buying his books to support this source of data showing why gun ownership is essential for private citizens.