The Trayvon Hoax
Unmasking the Witness Fraud that Divided America

By Joel Gilbert
Available as a book or video at https://www.thetrayvonhoax.com/buy/

My extreme distaste for conspiracy theories is, perhaps, to my detriment in a world where political factions are willing to put forward any accusation, no matter how false, to win. Thus, when my husband expressed interest in filmmaker Joel Gilbert’s analysis of how Rachel Jeantel came to be a key witness in the murder trial against George Zimmerman in 2012, it was with some hesitation that I ordered the video.

Joel Gilbert has been lauded as an investigative journalist and I expected an exposé along the lines of the Pentagon Papers back in the ‘70s. Gilbert starts his video by explaining that the 2018 candidacy of Tallahassee’s radical socialist former mayor Andrew Gillum for Florida governor caught his attention because of Gillum’s unflagging message that self-defense rights allowed white people to shoot black people whom they merely found fearsome. His campaign rhetoric often mentioned Trayvon Martin’s death, parroting the line that the deceased was only carrying Skittles and iced tea and thus he posed no danger to Zimmerman. 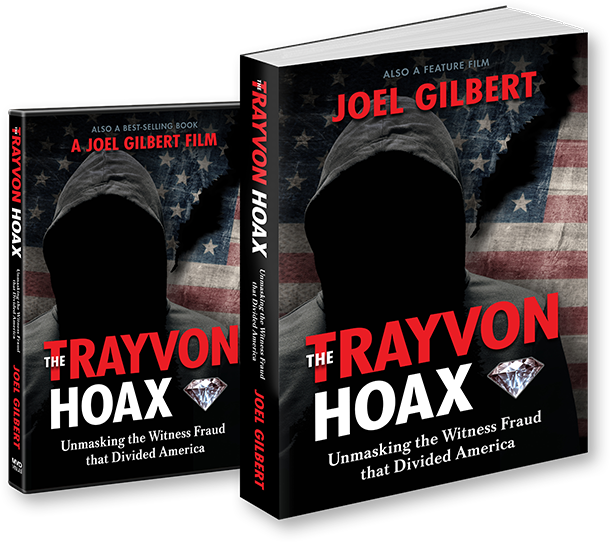 Like me, readers will remember how from 2012 to 2013 America watched the heavily-televised prosecution of George Zimmerman, a time during which many either sympathized with his plight and asked themselves whether or not they would have left their car to tell 9-1-1 dispatch the direction a prowler in the neighborhood had moved, while others empathized with Martin’s parents.

Gilbert suggests that Martin was the victim of a largely absent father and a mother who pawned him off on his father’s girlfriends at times when raising him became too much. Gilbert concludes that Martin’s family and their lawyers fraudulently coerced testimony from two teenaged girls–the 16-year-old Diamond Eugene of Martin’s romantic interest and her half-sister, Rachel Jeantel, who testified she was the “phone witness” speaking with Martin when he attacked Zimmerman.

Gilbert shows from trial documents that the Martin family’s attorney, Benjamin Crump, aided by Martin’s friends and family, badgered the 16-year-old Diamond Eugene relentlessly until she gave Crump a statement by telephone, primarily assenting to or parroting the assertions Crump passed off as questions. After that phone call, which was recorded, the real Diamond essentially disappeared, with 18-year-old Rachel Jeantel subsequently presented as the girlfriend with whom Martin was talking the night of his death, and who spoke with Crump a few days later. Jeantel was not believable and Gilbert set out to figure out Diamond’s true identity and why the witness switch was allowed to occur.

Extensive phone records from the trial evidence gave Gilbert 750 pages of text messages and call histories, which he combined with the youths’ Instagram accounts to acquaint himself with their culture. Searching high school yearbooks from the several high schools Martin attended, he matched social media pictures to the actual girlfriend.

While I was discomfited by the video’s portrayal of how engrossed Gilbert became in the life of the real Diamond Eugene, it gives a portrait of a self-involved American-Haitian teen that authenticates the second prong of his proof that Martin was not speaking by phone with Rachel Jeantel in the moments before he attacked Zimmerman. During the trial, the prosecution presented a letter to Martin’s biological mother Sybrina Fulton signed by and supposedly written by Diamond Eugene.

Engineering a face to face meeting with the real Diamond Eugene by purchasing clothing from her online fashion boutique, Gilbert contrived to obtain handwriting samples from the young woman. Prominent forensic handwriting expert Bart Baggett compared these to the letter supposedly written by the girlfriend to Martin’s mother. Gilbert told Eugene that he intended to give the clothing to various women as gifts and asked her to personally sign greeting cards to include with the gifts, place the cards in envelopes and then seal them. The saliva from sealing the envelopes provided DNA that, compared with DNA from clothing salvaged from trash outside the home of Rachel Jeantel and her mother, leads Gilbert to suggest that Diamond Eugene and Rachel Jeantel are half-sisters, mothered by Marie Eugene but raised by a different woman.

Gilbert explained, “Doing a little research, I learned that although upper class Haitian families favor the nuclear family model prevalent in the West, lower socioeconomic Haitian families routinely feature ‘plasaj,’ a form of common-law marriage. These relationships, often fluid, are reinforced by a strong extended-family network. Moving children from one home to another among extended families is not uncommon at all. Obviously given the large number of calls and texts between Diamond and Rachel I had observed in Diamond’s phone records, they were enjoying a close relationship as half-sisters. For Rachel to assume Diamond’s identity may seem outlandish to us, but in an extended Haitian Eugene family clan, it may not have been that big a deal.”

The witness fraud and the people who engineered it during the Zimmerman murder trial is interesting but it is not Gilbert’s most important point. The complicity of the politicians, the news media, and the attorneys driving the narrative that white people fear black people to such an extreme that whites shoot blacks without cause is the most far-reaching aspects of his research. The ripples from that false narrative went all the way to the presidential race, creating a voter bloc to assure Barack Obama’s return to the White House for a second term.

In The Trayvon Hoax: Unmasking the Witness Fraud that Divided America, Gilbert writes, “The media had no more interest in the truth than the prosecutors.” Martin’s mother and father had no interest in revealing the truth of their teenaged son’s descent into the drug and violence milieu of Miami, either, he wrote earlier. He also calls out prominent politicians and entertainment personalities for promoting the story that Zimmerman was so frightened of a lone black youth walking through his neighborhood that he shot him without cause. Despite police reports and evidence to the contrary, the national news media and activists with much to gain by stirring up racial unrest promoted that false story and a ground swell of unrest that moved beyond Florida and was echoed in the Ferguson, MO riots following Michael Brown’s shooting by police officer Darren Wilson. A racially divided America serves the political interests of many.

Gilbert relates that he talked to Zimmerman’s attorney Mark O’Mara early in his investigation and the attorney told him that initially, no one thought Jeantel could have been a fraud because she was such an awful witness that there was no compelling reason for the prosecution to put her on the stand. He continued that, in his opinion, no one ever expected Jeantel to be a persuasive witness. Gilbert concluded that her role was to stand in as the witness needed in order to arrest and prosecute Zimmerman. “For Crump, an arrest opened the door to a civil suit. For the State of Florida, an arrest kept the mob at bay. For Barack Obama’s Justice Department, an arrest meant getting out the black vote for Obama in 2012 in Florida and hopefully nationwide,” Gilbert wrote.

Gilbert observes that the person Trayvon Martin could have grown into has been entirely eclipsed by the politicking of Al Sharpton, Jesse Jackson and others seeking to expand their sphere of influence. Through his investigation into the fake witness, Rachel Jeantel, he developed a genuine sympathy for the teens the politicians exploited and that adds an interesting and unexpected facet to the book and video.

I hope that this analysis of a trial hijacked for political gain will encourage citizens to demand honesty and truthfulness from our courts, prosecutors and state officials, inspire people to challenge the sweeping proclamations of politicians seeking only to solidify their power base and to counter false news reporting at every turn. Joel Gilbert’s book and video spotlights a lawless and exploitative stain on America’s system of justice. What we do to keep it from happening again is up to us.