If you read my column last month, you heard about my pending trip to Gunsite Academy, and my invitation for Network members to meet and shoot the Gunsite Alumni Shoot together. While we were pleased to stop and chat with a number of our members throughout match day, we only managed to organize three of us into an informal Network shooting team consisting of Mike Martin, Gila and me. If you are one of the thousands of Network members who did not make it to the Gunsite Alumni Shoot, I will fill you in on how it went.

I have said for many years that the Gunsite Alumni Shoot is the most honest shooting match in the country. Why? Because there are no arcane rule violations to avoid, and just a few logical rules to follow, that’s why. Each stage has a stage briefing that spells out the simple rules to complete the task. Guns used are simply good self-defense guns. This was a 10-stage match, with each stage designed and worked by the Gunsite instructor cadre. 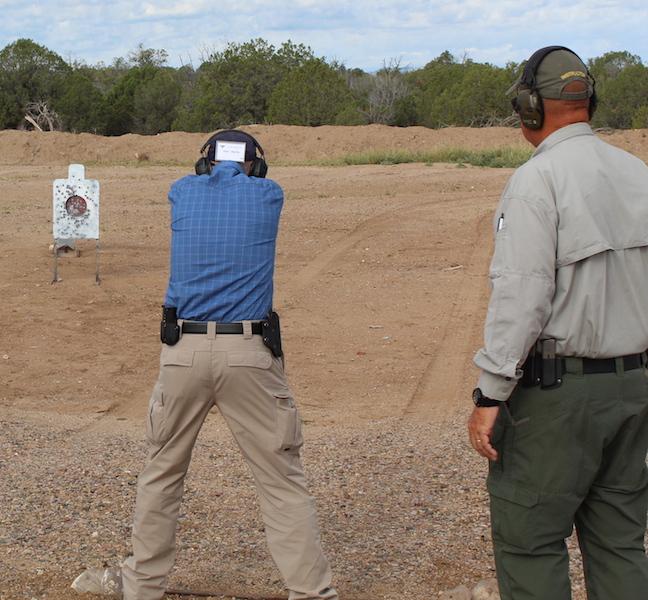 One of my favorites was the stage designed by Lew Gosnell, called “So Close, but So Far,” a very simple stage. Seen to the right, Mike Martin is taking it on with aplomb. The shooter drew and fired at a steel plate on a spring and hinge. You had to hit the plate to flip it open, revealing a second target. You immediately followed up the first hit with a shot through the hole to strike a pepper popper, before the hinged steel plate closed. This pair was at about 10 yards. Once you hit the popper, you immediately transitioned to a 50-yard steel target. Very easy, but also difficult if you didn’t have the ability to follow up the first shot with an immediate, accurate second shot. I managed to shoot this in 4.58 seconds, which put me in fourth place for the stage.

Another stage which was simple in theory, but difficult in practice was set up and run by Network member and Gunsite Academy instructor Freddie Blish. It started with the shooter firing a Robar Industries AR-15 carbine at a steel rotator target, then transitioning to their handgun and continuing to engage the rotator target until it rotated fully.

This target was designed and built by another Network member, Steve Camp, from Ravelin Industries. Network Advisory Board member John Farnam uses these targets in his training courses, and at my school, we have a couple of these to use for training. It is shown below, to the left. To effectively engage the rotating steel plates, one has to time the strike on the plate to exactly when the plate is either top dead center or bottom dead center, meaning that you shoot before it gets to that point. Larger caliber handguns have a distinct advantage, so I was happy to get the thing to rotate over with my 9mm Les Baer Custom 1911, in 14.2 seconds for a 15th place showing out of over 200 shooters. 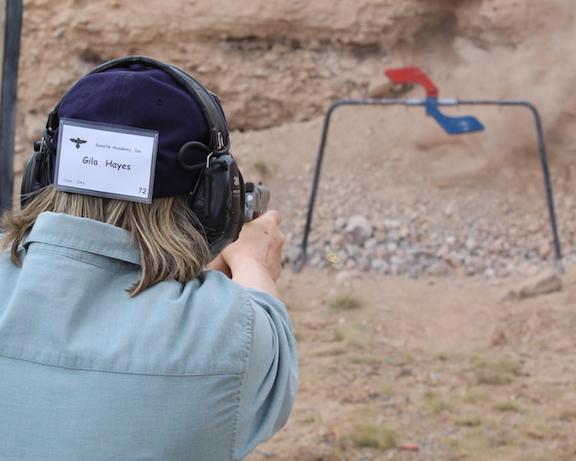 Another fun stage was called “How Good are You?” Aptly named, the target was a “head” shot next to a hostage target. The shooter started at 10 yards and could keep trying to make the head shots in 10-yard increments all the way back to 50 yards if he or she could make the shot. For each successful shot, 10 seconds was deducted from a start time of 50 seconds, resulting in a perfect score of “0” if you made all the shots. Hitting the hostage target was trouble, though, as a 50-point penalty was added to your score. Scores ranged from 0 points to 80. I managed to shoot four targets, and then I quit, figuring I was pushing my luck at the 40-yard head shot! My 10-second time was tied for second place.

These three were my best stages, but more importantly to my overall placement in the match, I had no really bad stages. Well, actually, I did have one kind of bad stage, called “Target Subtraction.” On this stage, you had to remember how many times you fired at a specific target, because the next one was one less shot, etc. I took about 40 rounds and 40 seconds to get through the stage because I lost count, so had to start over, I came in a humbling 67th on that stage.

Fortunately, my placement in the other nine stages was sufficient to be called to the podium to pick up the third-place overall trophy. I was pretty shocked to have placed that high, especially given the issues I had on stage six! That means I just have to go back next year and try again. I hope to see more Network members there next year. See http://gunsite.com/classes/gunsite-alumni-shoot/ and make your plans now. 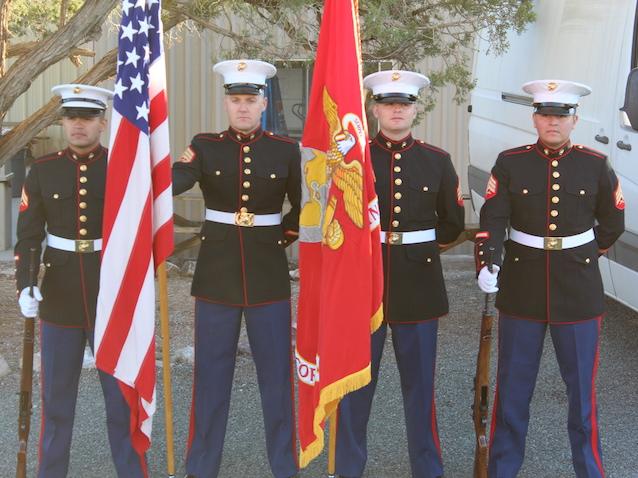 This gathering wasn’t just about shooting. It is said that the Gunsite Alumni Shoot is a “social event interrupted occasionally by gunfire” and I know that to be true. Gila and I saw many old friends and made some new ones, but we also got a re-charge for the old enthusiasm batteries by simply going back to Gunsite.

Much is said these days about the idea of “Tribalism” and if there is one “tribe” I am proud to be a part of, it is the Gunsite Family. Not only are the Gunsite staff and alumni the type of people I want to associate with, but also Gunsite Academy is high on my list of the most patriotic places to visit. For example, the shoot was opened by a Marine color guard presenting the American flag while the national anthem played. We followed the presentation of the flag by saying the pledge of allegiance, led by Gunsite’s Ken Campbell. And here is a shocker, NOBODY KNELT during the anthem!

After the shooting, while the scores were being crunched, Sheriff Jim Wilson, who most recently agreed to take on Network as a sponsor on his popular blog at sheriffjimwilson.com, entertained the group with his fabulous guitar planning and singing. He has produced three CDs over the last several years, and if you are a fan of old-style country music you would very much enjoy them. Jim’s songs kept me company driving back and forth to Gunsite this trip. You can buy them at his website http://sheriffjimwilson.com/the-general-store/. The CDs would make a great, unique Christmas present. 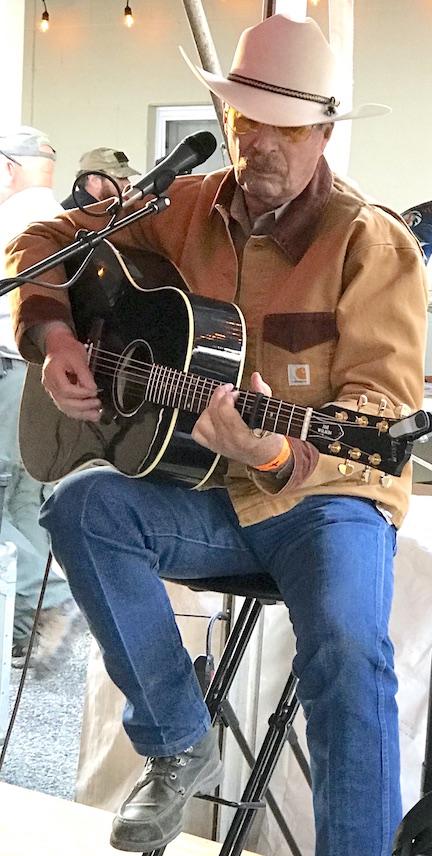 Shooters were then treated to a trip to the prize table, which was very generous. The prize table included some gift certificates for memberships in the Network, too. We are happy to be a sponsor for this match.

In other news, I also stayed on and took two week-long classes. I completed 499, the third in the Gunsite series of handgun classes, and a new class they added this year, Instructor Development. I typically take a class or two each year as a student to keep my skills sharp, and the 499 did just that. I will be writing an article for SWAT Magazine about the Gunsite Instructor Development course, which I took alongside Network affiliated instructor Don Larson, who owns Frontline Firearms Training out of Minnesota and Tom and Diane Walls, Network affiliated instructors from my school The Firearms Academy of Seattle, Inc.

A couple of years ago I left a gun with Freddie Blish at Robar to upgrade with his NP3 finish. This year, I left two guns with him, one a pristine barely-used Colt Lightweight Commander in .38 Super, a gun which he will be customizing to my specifications and one about which I will later write an article discussing customizing guns for self defense. I decided to reward the Les Baer Custom 9mm 1911 that performed so well for me at the match by re-finishing it, too, since the bluing was getting worn. I am looking forward to getting them back in a couple of months, just in time for next year’s shooting season.