This month, I read the third edition of one of the first books we reviewed in this journal, Ed Lovette’s The Snubby Revolver . This edition expands on topics that came up in a great interview Lovette gave us in the April 2019 eJournal. That interview addressed threat avoidance, while the book’s title suggests revolver instruction, but in reality, the book is much, much more. 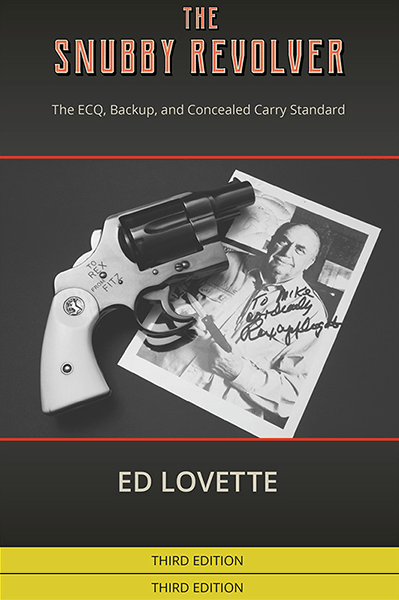 Why should you read a book entitled The Snubby Revolver? Lovette’s introduction explains, “We’re slowly losing all that good revolver ‘how-to’ we learned the hard way over a good many years, often at great risk, sometimes paying the ultimate price. I am concerned that the requisite revolver skills are not being passed on to those who need them.” If I may be so bold, I would add that Lovette also writes from personal knowledge about many tactical concerns facing the armed citizen, expanding the book’s value far beyond those going armed with short-barreled revolvers.

Lovette is now retired after working as a CIA paramilitary operations officer, law enforcement officer and U.S. Army Special Forces captain. The Snubby Revolver blends the lessons he learned by experience or from the experiences of others with scholarly research. He explains, “It is interesting to note that while gunfighting equipment and training have evolved considerably over the years, the gunfight that is resolved by a handgun today looks no different than its historical predecessors.” Lovette’s particular concern is defense at extreme close quarters. From his studies of armed encounters, he identifies the likelihood that “you will face a single assailant, and you will be alone...Your assailant will probably be armed with a handgun but may possibly be armed with a knife or blunt instrument. The distances will usually be less than 10 feet. It will be over very quickly. Reloading is rarely an issue.”

Lovette notes that his CIA work closely mirrored private citizens’ defense needs. “During my agency service, unlike the police officer, I had the options of confrontation avoidance and strategic withdrawal (running away) available to me,” he writes. “My work required me to be constantly aware of what was going on around me. As one of my Special Air Service (SAS) friends likes to say, ‘We had to be invisible, not invincible.’ This is an especially important distinction to make because, in theory, if you practice good tradecraft as well as good personal security, you should be able to avoid any unpleasantness,” he explains. During his career, the necessity of remaining invisible drove gun selection as well as behavior.

“If you are forced to grapple with your assailant, the weapon must have strong retention capabilities and still be able to fire,” he explains, relating an incident in which an officer couldn’t depress a 1911’s grip safety, another in which a pistol’s manual safety was inadvertently engaged, and a report of a struggle during which a pistol’s magazine disconnect deactivated the trigger when the magazine was inadvertently ejected.

The Snubby Revolver’s topics range from carry methods and holsters to revolver frame size, and much more. Lovette gives the nod to pocket holsters, acknowledging the wide variety of holster preferences in the revolver community. He stipulates that holsters must allow good access when seated in a car.

Pros and cons of various grips and how well they accommodate speed loader use lead into drills to diagnose grip fit issues. Of revolver sights, Lovette acknowledges, “Some will even suggest that given the role of the short-barreled revolver, it really doesn’t need sights at all. I disagree.” He endorses modifying revolvers to double action only but warns, “The double-action-only trigger does not make the gun safe,” proven by reports of negligent discharges after police agencies mandated double action only guns. He adds, “The double-action trigger does provide the user with a little greater margin for error. I recall several cases where officers told me they were able to stop the double-action firing stroke before firing the handgun when a suspect dropped the gun or knife, or their partner stumbled into them. In other situations, they were able to block the trigger during a struggle for the weapon by inserting a finger into the trigger guard behind the trigger.”

Lovette discusses ammunition selection in detail, as well as reloading technique, although he urges a realistic perspective, reminding his readers, “Most gunfights are resolved within the capacity of the five or six rounds the revolver carries. Reloading is necessary in about 10 percent of the documented gunfights involving revolvers. There is also a great deal of truth to the fact that if you have to reload during the gunfight, you are either missing a lot or you brought the wrong weapon.”

Nonetheless, “Reloading after the shooting stops amounts to good tactics,” he teaches. When you practice, “Spend most of your time on hitting. Get in the habit of reloading quickly ... (the reason being that if you need to reload, you’ll probably have to do it pretty quickly), and your speed will develop naturally,” he writes, offering techniques to maintain a danger scan during reloading, tips to guide the cartridges into the chambers without looking and more.

Lovette’s discussion of tactics focuses on defense at extremely close quarters. Although he addresses revolver use, these pages have broader applicability. He uses illustrative vignettes throughout, explaining, “You may note as you read the incident and then the lessons learned that the actual encounter (reality) bears little resemblance to any of the training you’ve had ... Most of our training deals with close quarters combat (CQC) technique. We can use verbal commands, gain distance, seek cover. We have the time and distance to apply tactics. However very little of our firearms training deals with extreme close quarters combat (ECQC). In extreme close quarters, we do not have the time and distance to apply tactics. We are fighting with our hands, a knife, a handgun, our training, and our mind-set. These are the dynamics of deadly force encounters most common to the legally armed citizen...” He urges readers to integrate physical defensive skills and alternative weapons training with firearms skills in preparation for circumstances under which shooting isn’t practical.

Lovette’s ideal training curriculum would include threat awareness to recognize both criminal and terrorist dangers, mindset, communications, unarmed defensive tactics, pepper spray, knives, handguns, flashlights and weapon retention. His priorities start with maintaining an appropriate level of awareness, acknowledging dangers, preparation and planning, and being a good witness. “Consider the following errors, which quite often snatch defeat from the jaws of victory: failure to correctly assess the threat, failure to control the subject, failure to watch the hands, failure to use cover, failure to shoot soon enough,” he writes, urging that awareness is the highest priority. He then teaches basic tactical decision making at the speed of real life, first applying those priorities to attacks in the home. These, he notes, are far more common than public affrays but have different warning signs, which he subsequently identifies. “Missing the danger signs is the difference between winning and losing,” he stresses. Because many do not carry a gun inside the home, if you need to run get a gun, time may run out, he warns, arguing for early detection.

Lovette teaches strategies to detect and escape attacks in public buildings. Maintain proximity to an exit, leave decisively without dithering when unsure if it is safe, move toward safety by assessing danger of being crushed by a panicked crowd, check for obstacles or attackers between you and the exit, and continue to scan while getting out, he writes. “Look before you leap, think clearly and quickly, keep your balance, and scan.” He discusses when to run and when to slip away unnoticed, identifies the risks inherent in shooting or having a gun in hand at the scene of a public attack, and discusses dangers that may wait outside.

Many years ago, I was privileged to attend a block of instruction in which Lovette demonstrated defense from inside vehicles. He comments in The Snubby Revolver that it is difficult to find reliable “information on when to use the vehicle as a means of allowing you to escape safely from a situation instead of using your gun.” The courts “will look upon you more favorably if you can demonstrate that you did everything you could to get away from the threat,” he adds and outlines when to use your handgun, when to drive, or when to simply let the assailant have the car.

He outlines carjacking or kidnapping pre-attack cues, writing, “What usually jams the untrained driver up in a carjack attempt is not driving ability—the skill that is missing is attack recognition.” He teaches that vehicular escape is often as simple as “taking decisive action and either getting the car in motion or keeping the car moving. This gets you away from the attack site, and as a moving target, you’re harder to hurt.” He discusses driving to a safer place, getting around cars and other things blocking you, and dismisses fancy evasive driving like J-turns, calling them a “waste of valuable training time.” Under stress, you can only do what you know best, he reminds. Sometimes acceding to a carjacker’s demands for the vehicle is best, he points out, so outlines tactics to get out of the car.

Much of Lovette’s hard-earned wisdom is distilled in The Snubby Revolver. I fear many who would otherwise benefit may fail to read the book because they don’t think it applicable to their needs. Revolver shooters are definitely a minority these days, yet many a gun hobbyist owns several (or more) revolvers, often carries a short-barreled revolver, but shows up at classes and matches with a semi-automatic to keep up with the other shooters. I think that’s unfortunate!

The Snubby Revolver’s third section closes out the book with an analysis of revolver size and weight, the history of revolver options and more. Lovette summarizes the advantages the snub nosed revolver brings to daily carry for personal protection, concluding, “For many of us, it is the bottom line in defensive handgun selection. It is the perfect combination of size, weight, power, concealability, and reliability. Street tough and combat proven.”

As I finished reading The Snubby Revolver, I can only echo Ed Lovette’s wish that revolver shooters continue to share their knowledge and experience as he has in this third edition of his book. Copies of The Snubby Revolver are sold at https://snubnoir.com/product/the-snubby-revolver-3rd-edition/.