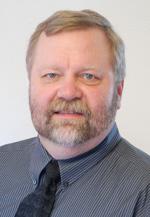 As I start this month’s message, I am sitting at Gate H15 at Chicago’s O’Hare International Airport, waiting to board a flight home after attending the 2015 Rangemaster Tactical Conference at the superb Memphis Police Academy with Network VP Vincent Shuck. I must admit that I attend the conference for purely selfish reasons, as by doing so, I usually get a full re-charge on the old enthusiasm batteries. This year was no exception and I am pretty excited about the future of the Network after speaking to so many of our serious members here at the conference.

BREAKING NEWS!!! I see my bags loading onto the plane! That is always a good sign. Rushing to board–be back soon. Okay, after that 16-hour break, I am back and ready to complete this column. This will be a complete experience write-up, so pardon the length, but there simply is too much to comment on about the Rangemaster Tactical Conference to make it a one pager.

I first introduced the concept of the Network at this very event in 2008. At that time we had no members, no money in the Legal Defense Fund, and no track record of helping our members. Compare then to now: we have 8700 members, nearly a half a million dollars in the Legal Defense Fund, and we have paid attorney fees for 11 of our members after incidents. In 2008, we were just starting filming our first member education DVDs. Talk about a fish out of water when I produced, directed and was the on-screen talent for those first three DVD lectures. Now I feel like an old pro, having produced eight of them and appearing on The Best Defense show for the past four years.

This year, I traveled to Memphis with two guns and three knives. The two guns were my Para 1911 with Crimson Trace laser grips, and a new Smith and Wesson Model 340 .357, tuned by Denny Reichard at Sand Burr Gun Ranch. The guns worked flawlessly.

For those wondering about flying with guns, it really is no big deal. Here is a picture of the gun case, guns and knives ready to be closed, locked and placed in a larger travel suitcase, which is then also locked, all with TSA compliant locks. The ammunition goes in factory boxes separate from the guns. Guns are declared at check-in, fill out a form, and follow the instructions of the ticket agent and TSA screener. It’s that simple.

Weather when our flight touched down was pretty horrid (at least for Memphis). We arrived to freezing rain and snow, and that pretty much remained the norm for the duration of our three-day visit. That meant lots of indoor training. That was the good news. The bad news is that at least one outdoor training track was cancelled due to downpours of very cold rain. There were multiple training sessions going on simultaneously, so there was no shortage of things to do. And of course, there was the shooting match, where we got to pit our skills at shooting (and at shooting matches) against the other participants and trainers in attendance. The match is voluntary and I know that many people were busy taking or teaching classes, so not all participated. 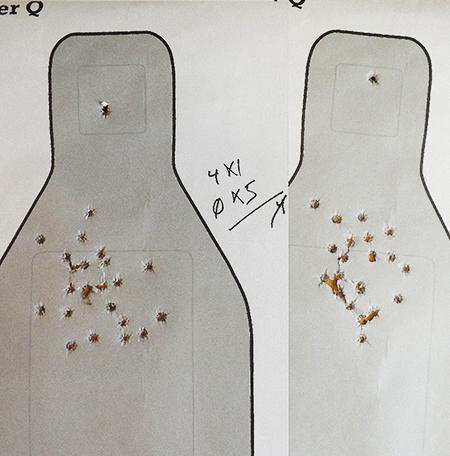 So Marty, how did you do at the match? The answer is that I shot well enough that I should have placed in the top 10, but I didn’t place in the top 10 or even in the top 20! Why? Well, I had a software glitch. I had not shot on Rangemaster’s new training target before, and if you will look closely at the picture you will see a faint outline of the center-scoring rectangle. Look again and you will see my shot groups with a BUNCH of shots just a little high.

I have absolutely no excuse, because I saw the targets before I shot the match, but I did not equate what I saw (to shoot into the center chest) with my programed response of where I normally shoot (to the high chest). So, I sadly came in much lower in the final standings than I could have, if I had just paid a little more attention to detail. So be it. I was excited to see my friend Lynn Givens’ very high placement in the rankings. She came in third overall, out of 136 shooters, which is awesome and well deserving of a little praise. She is, of course, wife of Tom Givens, the organizer of the event, but had no advantage because of that, because all the scoring was a straight “points down plus time,” type of scoring, with the tactical exercise going unscored this year (as I think it should be). 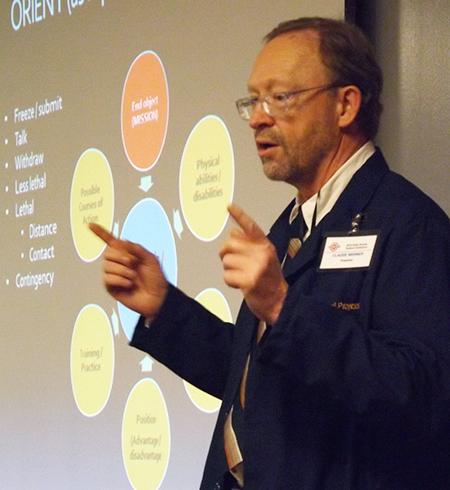 Thanks for a good skills competition, Tom. I took my targets home, and am going to put them up in my garage above my loading bench. Maybe I will figure out where to aim by the time next year rolls around. That’s enough about me! This article is about the conference and what it meant to the participants and to the Network.

I was gratified to get to meet and talk with all the Network members that took the time to stop me and shake my hand. Out of the 180 or so conference participants, I would estimate at least one-third were Network members. That made it a very friendly environment.

The biggest disappointment of attending the conference is also its biggest draw. There was simply too much good training to take in over a short three days and I had to miss many lectures and training blocks I would dearly have liked to attend. But I did get to sit in on several lectures from top trainers in the country. Claude Warner (top photo, right) and his training partner Linda Hoopes, put on an excellent two-hour training block about communications with partners during a violent encounter. This is a subject area that I personally wanted to learn more about, and I was not disappointed. I was fascinated by psychologist William Aprill’s discussion of the five Ws of risk. It was great content and William is also a great lecturer. (Middle photo, right.) 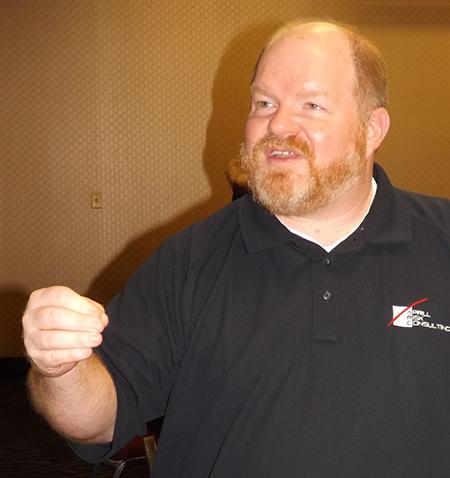 By now you should have heard of an attorney named Andrew Branca (bottom photo, to the right) who is going around the country putting on seminars called The Law of Self-Defense. Now, understand that Andrew and I became acquainted back in the early days of the Internet and chat rooms, but we had never met in person. It was absolutely great to be able to attend a condensed version of his daylong seminar. I was so impressed with his depth of knowledge on this topic that I want to get to his whole course one of these days. Network members would also be well served by attending the course, learn more at http://lawofselfdefense.com.

On the afternoon of the second day our Network Vice President Vincent Shuck filmed me giving a new presentation called Court-Proofing Self-Defense. This is a presentation that I have been working on for a couple years, and was finally comfortable enough to put it on film. I’ve condensed the presentation down to an hour, which we intend to release on the Internet for all to see. With the rise of social media and sharing of good information on the Internet, I want to see how sharing some of the Network’s educational products can generate more membership. When it is released, we will, of course, let you all know. 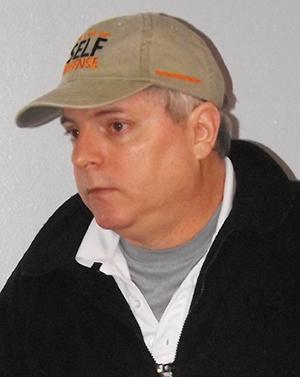 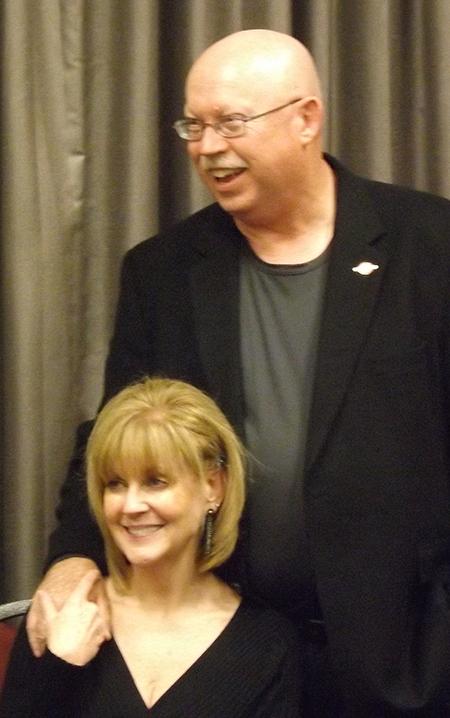 For the trainers, the highlight of the Tactical Conference is a special dinner hosted by Tom and Lynn Givens (shown in the photo to the left). I remember in the early days of the event, the dinner would be held at a local restaurant, with a dozen or so trainers sitting around a big table in a small, intimate gathering. Well, the event has grown now, and at this year’s trainers’ dinner, I counted about 40 trainers and their spouses. Each year, Tom suggests a topic for discussion, and this year, we talked about how the trainers develop assistant instructors to help teach. It was a fascinating discussion, which turned into a discussion about how to establish standards to which professional instructors should adhere. We didn’t make much headway on that topic, but the discussion was nonetheless very engaging.

The rain and snow subsided a little on the morning of the third day, just in time for me to attend a training block by John Farnam and Steve Camp, seen in the photo (below, left) with John (left) talking about utilizing a rotating target, while Steve (right) looks on. John has been using this target as a training aid for several years. Steve makes the target system. (see http://www.ravelingroup.com/professionalgear/ar500targets.html) After a short discussion about how it works, we went outdoors to give it a try. There are several ways to use the metal rotating target and I figured since I had about 20 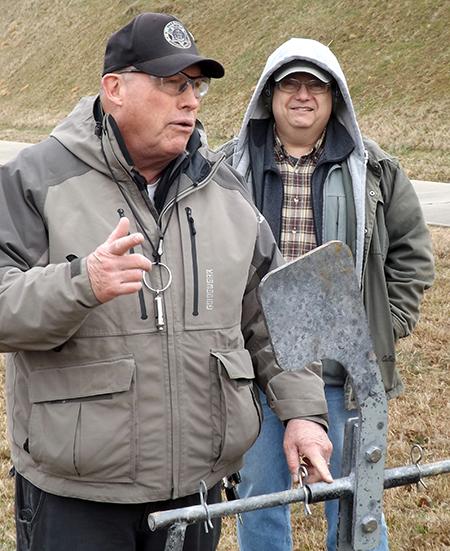 rounds of ammo left over from the match, I would give it a try. Well, I will admit the target humbled me a little, so I bought another box of .45 and did some more work with it. Then I bought another box, until I finally got the hang of making the target spin on its axis. A great training tool, and frankly, it would make a nice addition to anyone’s backyard range. Just be sure to have plenty of down range safe area. As with all steel targets, there is the possibility of ricochet over the target. And, be sure to wear good eye protection while shooting on steel, because there is the slight possibility of fragment bounce back. That was nothing that I worry about, as long as I have good eye protection and a ball cap.

As the conference wound down, the weather got worse again, with a real snow and ice storm threatening on Sunday night. Several of the Tactical Conference participants left for the airport early and I can’t blame them. Vincent and I hung around for the final awards presentation and enjoyed using the time to talk with many members of the Network, while wrapping up the conference. Interestingly, the really severe weather never materialized, so we had an uneventful trip back to the airport Monday morning. About 16 hours later, I arrived home, enthusiasm fully restored, and with a brain full of new ideas. If you haven’t attended a Rangemaster Tactical Conference, I highly recommend it. More info at http://www.rangemaster.com/tactical-conference/history-of-the-conference/