Understanding Force from Shouting to Shooting 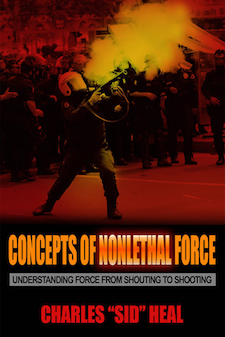 Early last month, a Portland, OR man was hospitalized after an Antifa mob beat him severely. I was disturbed when a news report noted that he got out of his vehicle and threatened the armed mob with a pepper ball device, despite legally having two firearms in his vehicle. The guns were subsequently stolen by the mob. The report brought home to me how many force options are available.

Add to that, the nearly impossibly complicated challenge of deciding, while terrified, what level of force is warranted. I wondered if the victim in this situation had too many options and not enough knowledge about mob violence. Reading the story made me think about how little many people know about the effectiveness of nonlethal force options. Some weeks earlier, I had scanned a CA law enforcement retiree’s book about nonlethal force. The Portland story motivated me to pick it back up and read the entire volume.

Concepts of Nonlethal Force is something of a textbook about nonlethal force options used by police and the military. Many pages are a little technical, despite author “Sid” Heal’s concerted effort to put his extensive experience and knowledge into layperson’s language.

“There has already been much hyperbole, distortion, and equivocation on the subject of nonlethal force,” introduces author Heal. “I have spent all my adult life involved in some facet of conflict resolution, to include being a combatant. Some will believe that this has tainted my perspective. Indeed, it has! It is what has made me that die-hard pragmatist ... I have personally experienced the failures in applying an unrealistic solution to a very real, and often dangerous, problem. To that end, this book is focused on providing practical, but humane force options in an inherently violent and amoral world.”

Heal begins by citing the pitched word wars over whether force options from pepper spray to rubber bullets should be termed nonlethal, less lethal, less than lethal, low lethality, minimal force, or any of the other terms used. Heal wonders why, when it is the human user who renders any weapon lethal or nonlethal, a terminology controversy exists. “The intent of the user, not the characteristics of the weapon, is the primary factor for whether a particular weapon should be considered lethal or not,” he stresses, adding, “Whereas a lethal weapon primarily attempts to defeat an adversary’s ability to resist, a less lethal device attempts to defeat his will to resist.” He concludes, “A lethal weapon is judged on its effectiveness, a nonlethal weapon is judged on both effectiveness and safety.”

Nonlethal force shouldn’t be thought of as a “safe alternative,” despite advertising claims. Heal explains, “Since all uses of force are attempts at changing human behavior, coupled with the fact that the amount and type of force required is never completely apparent or universally applicable, some injury can always be expected.” Like police, the armed citizen has to think about employing a nonlethal weapon earlier in an escalating fight before deadly force is the only option to prevent being killed or crippled. Heal notes, “Because nonlethal options require substantially less provocation before engagement, a commander can provide a quicker response and intervene at earlier and less dangerous stages of an escalating situation.” Of course, private citizens have to make decisions without relying on a law enforcement command structure, but decisive action is still needed. Heal acknowledges the ambiguity present in violent confrontations, but points out that “the skillful use of nonlethal options can force an adversary to declare intentions,” reveal mental illness, deafness or inability to comprehend verbal warnings.

Thinking about the man beaten by the mob, one looks for guidance in when to employ lesser or higher degrees of force. As nonlethal force options multiplied, the decisions that have to be made also increased in number. Heal observes, “The situations in which nonlethal options will provide an advantage are always somewhat unique and unpredictable. Even more critical, they are temporary. Failing to use force decisively and promptly can easily result in escalation,” and in another chapter, he comments that, “Waiting for an incontrovertible exhibition of intent is not only accompanied with significant risk, it cedes the initiative to the adversary.” Timing is important.

The level of force used has to be, in the words of Rory Miller, “scaled.” (See https://armedcitizensnetwork.org/our-journal/archived-journals/277-november-2012#Review) “Many situations rapidly escalate from less dangerous circumstances before requiring deadly force to resolve. An individual who is free to employ a variety of options is more likely to be proactive, retain the initiative, and be quicker to recognize situations requiring deadly force than one compelled to examine a situation isolated by either/or parameters,” Heal writes.

Heal warns against thinking force options as existing along a linear progression, calling it “a recipe for disaster.” He observes, “Where you choose to place a particular force option on a spectrum depends on whether you believe the predominant criterion should be the amount of injury likely to be sustained by an adversary or the amount of defiance anticipated. These are commonly referred to as ‘effects-based’ and ‘behavior-based’ rationales.” He adds that behavior-based rationales are, in his experience, “much easier to justify, both in the criminal and civil courts, as well as the court of public opinion.”

Still, nonlethal options might fail to stop hostilities or might injure or kill the aggressor. Heal writes that while the affects of pepper spray (OC) or a baton strike are fairly predictable, indirect results like injury from falling are “contextual” and remain the responsibility of the user. For pepper spray, unanticipated effects due to “diseases of the heart and lungs, or intoxication, as with stimulants, such as methamphetamine or cocaine,” have been most prevalent Heal warns, echoing our affiliated attorney Penny Dean’s discussion of pepper spray use in our April and May 2018 editions of this journal.

Expect unexpected consequences from any use of force! “Some of the more belligerent combatants become enraged and will immediately attack, and a lot of the injuries to all parties occur during this period...Conversely, suspects who have anaesthetized themselves with drugs or alcohol may exhibit little or no discomfort. As a general rule, if OC is applied correctly but didn’t work the first time, it won’t work at all...a different force option needs to be quickly applied to avoid a rapid escalation,” he advises.

The news is rife with suggestions that police should not have used nonlethal force in one situation or another, and sometimes the courts agree. Heal explains that what constitutes excessive force is extremely dependent on where an impact device strikes, as well as on age, whether he is healthy or sick, sober or inebriated, calm or agitated, to name only a few factors. Psychological resilience is also unpredictable, he notes.

When the aggressor remains non-compliant, repeated applications of nonlethal force predictably increase the likelihood of injury. “It would seem sensible then, that when force is necessary, it should be applied decisively rather than escalating from milder methods,” Heal writes. “Somewhat ironically, this results in less injury to both suspects and users.”

Pain tolerance is another entirely unpredictable factor. Heal cites analysis by researcher Charles Swett showing that the “portion of the population that is far more resistant to force than the rest of the population...tends to be large, healthy, determined males.” He later adds “the fit, strong, determined, emotionally disturbed, or intoxicated members of the population,” in his experience, require much more force before complying.

Civil law suit is an ever-present risk–as are criminal charges–when any degree of force is used. Heal explains that officers exercising considerable caution to avoid striking where permanent injury may result, still send combative subjects to the hospital, and are more likely to sustain injury themselves, owing to the necessity to get close to the assailant “making us vulnerable to kicks, blows, and thrown objects.” Remember also, as Heal noted earlier in the book, reactions to physical pain are highly subjective. “Pain that would be devastating to one individual may be only mildly irritating to another, especially if they are under the influence of some drugs, are highly emotional, or are mentally distraught.”

With TASER®s somewhat available to private citizens, Heal’s “Electrical Options” chapter will be useful. He observes, “Ironically, electrical options are some of the most studied and least understood of all nonlethal force options. In the United States, they are also among the most controversial.” Here, Heal gives an excellent layman’s explanation of the science behind how electricity reacts with the human body.

He explains resistance to electrical shock, noting that while dry human skin has some resistance to shock, the muscles and organs underneath have far less. Thus, he explains, a break in the skin can have a major effect. Of course, “Whether the skin is wet — whether the dampness is from rain or sweat, or even moisture in the atmosphere — can affect the severity of an electrical shock. Whether it is injurious or not depends on the amount of electricity, the duration of the exposure, the general health of the person, and even the frequency of the electrical current.”

A TASER®, Heal writes, uses “electrical shock that is of a frequency and current designed to ‘tetanize’ the voluntary muscles, especially the arms and legs, but without causing lasting harm. This means that the muscles involuntarily contract and spasm, and the greater the muscle mass involved, the greater the effects.” While pain is a byproduct, he explains, it is not the intent of the device.

I was interested to read Heal’s chapter on what he calls “biological options.” He cites domestication of horses and dogs to participate in war early in humanity’s history, commenting that it should come as no surprise that both provide a nonlethal force option today. Dogs, he continues, are “one of safest and most effective” nonlethal options available. Of all the force options Heal discusses, highly-trained dogs are the only one that can be called back when circumstances change.

Heal discusses a number of force options that are in their infancy, but may grow into useful and effective defenses in years to come, and later states, “We are now entering an era that history will someday recognize as the dawn of viable nonlethal force options.”

Concepts of Nonlethal Force closes with a synopsis of the value of force options in law-enforcement and his words are equally applicable to the private citizen. Critics do not understand use of force, he notes, “Physical confrontations are not pretty. They do not look like the fight scenes on television. They more often resemble vicious dogfights rather than boxing or wrestling matches...The force used must be decisive in nature because there is little or no time to evaluate each application to determine its effectiveness.”

Adding to the book’s value for research, the final pages include a 10 page glossary, 50 pages of footnotes citing authoritative articles and a detailed index that helped me review specific subjects in the book about which I wanted refreshers. Concepts of Nonlethal Force is a book I will return to time and again as a reference work and I appreciate the work author “Sid” Heal put into “plain-speaking” the truth about nonlethal force options.