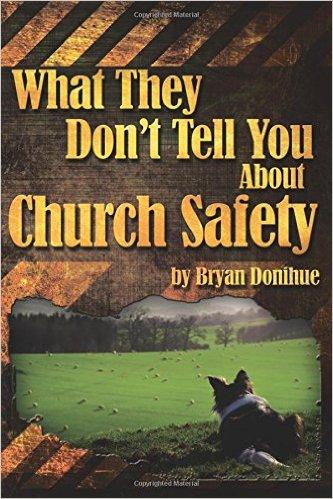 What They Don’t Tell You About Church Safety

Although the Network is an individual member services organization, a surprising number of calls and emails come in from armed citizens who are working with their churches to improve security. Naturally, we point those leaders toward traditional insurance for liability and errors and omissions coverage, as a church’s responsibilities are very different from those of the individual armed citizen. Still, those questions and a desire to understand the issues faced by church security teams, led me to buy and study several books. The one that impressed me most was Bryan Donihue’s What They Don’t Tell You About Church Security.

Donihue was drawn into leading a safety team for his church family owing to earlier work in law enforcement, the military and corporate security. Besides, as a pastor’s son, he grew up as a church insider. Seems like a natural match, doesn’t it? He relates how violent events at other churches led him to create a safety team for his church. He discovered that many churches not only lack a safety team and plan to counter attackers, but also are unprepared to help parishioners who suffer heart attacks during worship services or broken bones during a church youth activity. Too many assume that emergencies and suffering don’t happen in the Lord’s house, he comments.

Providing safety for congregating worshipers is an entirely different challenge than providing commercial security guard services, Donihue emphasizes. He stresses from nearly the first page through the last, that church safety teams are a ministry, and team members need to think like ministers and servants to the flock, not like guards, police or soldiers. He holds a profound conviction that church security functions healthily only if each safety team member comes to the role with the heart of a servant and is driven to help and care for their fellow churchgoers.

Donihue urges participants in church security to give honest consideration and answers to these questions:

Even the title given these safety providers is important, the author writes. He tells of originally titling his team the Emergency Response Team, ERT, for short, but it gave the wrong impression, he explains. He settled instead on calling his team the “Frontline Safety Team,” since their church is the Frontline Community Church. A “warm, visible presence” is the highest service the safety team provides, he asserts, with the happy side effect of often detecting danger before it strikes, discouraging theft or embezzlement and other crimes.

“Your church, and the church as a whole, does not need a security guard,” Donihue emphasizes later. “They need servant leadership in a safety ministry. You must have the character, leadership and integrity to go with the competence. On the flip side, if you have the character, leadership and integrity, but do not show the competence, your ministry will also end very quickly,” he adds, stressing that team training is vital.

Retooling what had once been a security team, Donihue created a safety ministry and complaints dropped off almost immediately, as parishioners became aware that the team existed to look out for their well-being. “Although we still train vigorously for security issues, our language and internal thinking shifted to reflect an ideal of safety. At that point, we no longer acted like security guards or bouncers,” Donihue reports, commenting later that moving away from standard security models “breaks all of the current conventions, especially for those who come from a corporate security background.”

This thinking applies not only to perceptions amongst the safety team and the church members, but in larger church organizations it influences the chain of command, the part of church leadership to which the team leader answers. Donihue urges congregations to put their safety team under the same umbrella as the church greeters and ushers, not under those overseeing church assets. In fact, the author recommends that safety team members serve alongside the greeters and ushers, explaining, “By working with and among your greeters and ushers, your Safety Team Ministry can serve with warmth and caring, while helping protect the church and her ministries.” Serving here encourages a nearly invisible presence with the safety team camouflaged amongst the greeters, instead of standing in the signature bodyguard pose, nearly at attention and giving everyone who walks through the door a hard looking over. “I do not allow my team to stand in the back or off to the side and simply glower with their arms folded. One of the tremendous changes that came from our re-design was to bring the safety team to the forefront on Sunday mornings. My team is trained to mingle with the crowds in the lobby, opening doors and greeting people,” he stresses.

Perhaps when church leaders oppose safety teams for their church, they have suffered from earlier encounters with security done wrong. Donihue advises fledgling safety teams on how to approach church leadership about the need for church safety. He goes on to address team member dress codes, whether the team should blend in with the other worshipers or be subtly identifiable through nametags or matching shirts.

The church safety team needs training in dealing with fire, weather hazards, active violence and medical emergencies, he enumerates. In other words, it is a lot more than carrying a gun and looking hard at everyone who comes in. Donihue asserts that safety team members need skills ranging from First Aid, CPR and Automated Electronic Defibrillator (AED), to assisting lost children, detecting security threats, patrolling the facility, with some team members trained and practiced in firearms use, as well. Before addressing the latter, however, he stresses that training needs to address “basic security topics of observation and awareness. By being aware, your team has the potential to spot trouble before it starts. From subtle cues in body language, to clothing and packages, a state of awareness will help keep your church and your team safe,” he urges.

Do not fail to provide full medical kits, Donihue repeats and again emphasizes that no church should be without an automated electronic defibrillator (AED). “The very first training that your team should receive is First Aid/CPR/AED training. By contacting local certified instructors, your team can gain valuable training and depending on your church’s insurance, may even see some discounts to your policy by having trained personnel on staff.” He later concludes, “Your safety team must know how to treat injuries and medical emergencies if they are going to be able to serve the congregation.”

In large facilities safety team members also need equipment to coordinate their efforts, whether they carry handheld radios or wear ear buds. Radio communications instead of using cell phones is preferred, Donihue recommends, noting that radios can get word of trouble to multiple team members simultaneously.

What is the role of armed team members and armed churchgoers? Donihue notes that some states regulate gun carry in churches, adding that in his own state, Michigan, approval of the presiding church officials is required. In any case, “Firearms are a polarizing subject in any polite company, and the church is no exception. In fact, I would say that the church is even more sharply divided,” he comments. In formulating policies, he recommends that church leaders determine–

Once those questions are answered, he recommends recruiting suitable armed citizens for safety team participation, giving the nod to, “Someone who already carries a firearm every day,” and is thus comfortable with going armed. He states a strong preference for someone who carries concealed and undertakes frequent and realistic practice. In addition, strike up alliances with local law enforcement tactical (SWAT) teams, perhaps even offer the facility during non-use hours for them to train in, so they gain the advantage of known ground, he suggests.

The book ends with a great bibliography and linked resources including http://sheepdogdev.com, the website of another church safety proponent, Carl Chinn, and several others, as well as links to Lt. Col. Dave Grossman’s work. At the end, an article written by Donihue discussing The Dichotomy of the Armed Christian is added for the edification of any whom may be troubled by the idea of use of force in defense of the church. A second appendix gives the entire text of Lt. Col. Dave Grossman’s On Sheep, Wolves, and Sheepdogs, excerpted with permission from his seminal book, On Combat.

Click here to return to June 2016 Journal to read more.