Secrets of the Snubby 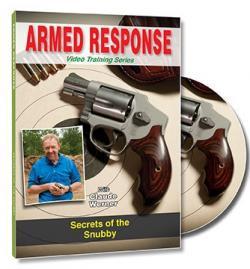 The snub-nosed revolver is the most popular and best selling handgun in the country and shooting it better is the topic of a concise and instructive one hour lecture by Claude Werner. Werner is The Tactical Professor, blogging at http://www.Tacticalprofessor.com. A retired Army Captain with 10 years of service in Special Operations, he has six IDPA Championships with snubby revolvers to his credit. He was formerly the Chief Instructor at the elite Rogers Shooting School in GA. In other words, when Werner discusses improving your shooting skills, it is a good idea to listen.

Long a favorite with those who carry guns for self defense, the short-barreled revolver, fondly called the snubby, is valued for its small dimensions, light weight and ease of concealment, Werner comments by way of introduction. The drawbacks for this popular little gun include a stiff, long trigger pull, small sights, short sight radius and limited ammunition capacity, he accounts.

Werner teaches the viewer how to perform well with the snubby revolver despite these difficulties, or as he puts it, “maximize your ability to use the snubby effectively.” Many shooters have trouble manipulating the double action revolver correctly, he begins. The cure starts with proper trigger finger contact with the double action revolver trigger: the crease of the trigger finger centered on the face of the trigger for more leverage to compensate for the heavy trigger pull.

Werner identifies two common double action trigger manipulation methods – that of pulling straight through compared to staging the trigger, a common competitive shooting trick of pulling quickly, nearly all the way to hammer fall, then hesitating and gaining control right at the end of trigger pull. Staging is fine for competition, he explains, but not for defense because there is a “distinct possibility that at the end of the stroke you will have a negligent discharge.”

The reason many have difficulty hitting accurately with double action revolvers, Werner analogizes, is that the shooter mashes the trigger like a dragster driver slamming the pedal all the way to the floor for rapid acceleration. This disturbs sight alignment and pulls the muzzle off target as the shot fires, he explains. Instead, he urges, imagine merging onto a freeway. A skilled driver accelerates smoothly but quickly to merge with traffic. When shooting the double action revolver, press the trigger smoothly and quickly so you do not disturb the sights, he compares.

While honing the skill of double action trigger control, start with slower presses of the trigger, then as you can keep the sights aligned, pick up speed as proficiency increases. “This may take you hours of practice to learn to do this quickly without disturbing the sights, Werner observes. Revolver shooters have the best gun in the world for dry fire, so he naturally discusses this training technique for learning trigger control.

While much of Werner’s focus is on the shooter’s skills, he recommends moderate changes to the gun. Polish the trigger to radius the sharp edges, he suggests. The rounded edge allows the finger to slide across the trigger, accommodating the pull through technique.

He also demonstrates highlighting the common blade and groove sights milled into many snubby revolvers, using two colors of enamel or nail polish on specific areas of the front sight blade and a fine-point black indelible marker on the rear sight’s notch. If your revolver has a pinned or removable front sight, you might upgrade to a night sight with a tritium insert or an XS Sights Big Dot for an even more prominent front sight, he adds. If you replace the sights, check your revolver’s point of impact and make sure you know exactly where your bullets are going to go with the new sight combination, he stresses.

Even with these enhancements to the sights, the snubby’s short sight radius makes aiming harder than it is with larger guns. To assist with accurate aiming, Werner explains the relationship between accurate snubby shooting, body index and understanding and using the dominant eye. Peripheral vision can pick up the sights as the presentation brings them into lower limits of vision, he notes. As the sights come into view, switch focus from the threat to the snubby’s front sight, thus using the eye/target line to quickly align the sights even while extending toward the target, he teaches. This segment combines excellent verbal instruction with good camera work in a well-presented lesson.

This principle is revisited when Werner teaches drawing the snub-nosed revolver to a high pectoral position beneath the dominant eye so the gun can be driven straight to the target to benefit from the eye/target line technique. The single most common mistake people make drawing from a holster is to get the gun out and then make a scooping motion before bringing it up on target, he opines. When this presentation error occurs, the shooter is unable to see the sights until the gun in on target in a fully extended shooting stance, slowing the first shot. A bit later he demonstrates aiming with the entire silhouette of the gun, explaining how proximity to the target dictates whether this method is sufficiently accurate for the distance at which you are working.

A common aftermarket modification to snubby revolvers is changing out the grips to better fit the size of the shooter’s hand. Werner weighs pros and cons for replacement stocks discussing materials and grip length. He is more concerned with the depth of the grip panel from the back strap as it affects the placement of the trigger finger on the face of the trigger. If stock depth is too great, you will have to over-reach to contact the trigger, moving the back strap out of the web of your hand and sacrificing alignment with the bones of your arm, he explains.

Werner later revisits grip, demonstrating how a properly fitting revolver lines up with the bones of the arm for a one-handed grip. He demonstrates common grip variations, without expressing any particular fondness for one over another, but warning that if gripping with thumbs forward, the thumb must stay away from the cylinder gap and not drag on the cylinder, either. Regardless of the thumb position, you should be squeezing the grips firmly with the firing hand, he concludes.

Use of pocket holsters is covered as Werner explains how to draw from trousers with large slash pockets as well as smaller pockets as is common on most denim jeans, where the thumb can snag on the top of the pocket and trap it. In addition, he demonstrates several methods for drawing from an ankle holster. He explains use of bellybands and adds that bellybands work well where you can’t conceal a conventionally holstered gun or if you wear clothing without belts.

Improving marksmanship with the snubby starts with an analysis of targets. Werner prefers simple circles with center dots and uses an old CD for a template. Skill builder drills start with dry fire at ten feet on the CD-outline target, followed by ball and dummy drills interspersing an empty case amongst live ammunition to analyze how smoothly the shooter rolls the trigger. “What we’re looking for on that exercise is to make sure that our sights aren’t moving when we press the trigger. Especially when we come up on the dummy round, we want to see the sights vibrate, but not jerk down because we are pressing the trigger improperly,” he details. The same ball and dummy exercise is added to drawing from the holster.

At the end of his training drills chapter, Werner illustrates setting up scenarios he has read about in the news or the Armed Citizen column in the NRA publications. He explains that he likes to start by setting up a scenario as close to the situation reported, shoot that scenario, and then try it with alternative tactics to see what could be done better. The program ends with a second set of range drills presented by Wayne Spees and showing different reload methods, shooting stances, and a few other modifications. His demonstrations of reloads and use of the non-dominant hand are probably the most valuable of this addition to the program.

Armed Response’s Secrets of the Snubby is a useful training video that comprehensively covers the principles of snub-nosed revolver shooting, how to improve your revolver shooting skills, and how to maintain and increase accuracy with this common type of handgun. Whether you regularly carry a snubby, if you prefer a slightly larger revolver, or if you only occasionally shoot a revolver, Werner offers valuable skill builders and techniques in his concise but thorough lecture on DVD. The program is formatted with good chapter-end notes that tie down the facts presented in each chapter.

Click here to return to June 2015 Journal to read more.