The Heritage Guide to the Constitution 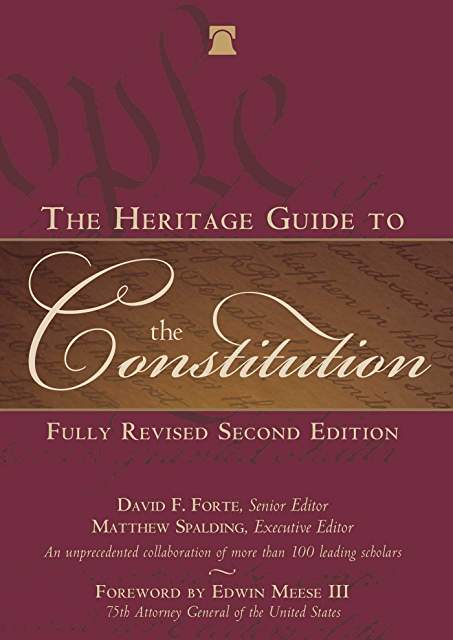 Independence Day is almost here and as has been my practice for several years, I looked for a book to read about the principles established by the founding fathers to preserve the freedoms they sought when they left England. I was eyeing The Heritage Guide to The Constitution, when I discovered that its contents are available via web browser.

Heritage.org suggests a $100 donation to their 501(c)(3) foundation in exchange for a hard-bound edition of this compendium or the book can also be ordered for $30-$37 from Amazon.com. I became intrigued by jumping from weblink to weblink to study the Articles and Amendments of the U.S Constitution then read the essays explaining both the history and application of each element. Since I studied the version published on heritage.org, I can’t comment on the Kindle or hardcopy versions that are available because I didn’t buy them.

There is a lot of study material at heritage.org/constitution! Even reading a little every night and more on the weekends, I was unable before this journal’s deadline to absorb every essay on the site. In time, I intend to read each of the numerous essays that explain the intention and history of the U.S. Constitution.

An example of a topic members may find interesting is Article IV Section 2, Clause 1, “The Citizens of each State shall be entitled to all Privileges and Immunities of Citizens in the several States” because of its importance to the Supreme Court case McDonald v. Chicago in 2010. An essay written by two law school professors, David F. Forte and Ronald Rotunda, explains that from early times, the English kings would grant “franchises” to let villages impose their own rules, and this brought about the idea of “immunity” from legal obligations to the crown. The concept of privileges and immunities was carried into the American colonies while under British rule. Immunity might be granted to individuals or to communities, this essay explains. In this way, acknowledgement of individual rights including rights to travel freely or to conduct commerce were carried forward by the founding fathers first through the Articles of Confederation and then in the Constitution’s Article IV and, of course, later into the 14th Amendment.

Readers wishing to follow this particular study online can next click and read related essays about the 14th Amendment. For example, following the essay on Article IV forward, first to the language of the 14th Amendment and then the nine essays on individual elements in that amendment, the reader accesses several hours of additional academic-level reading.

Here’s an example, offered at the risk of failing to acknowledge all the other wonderful educational essays. A reader seeking a clearer understanding of protection against unconstitutional state laws intended by 14th Amendment would click on the essay at https://www.heritage.org/constitution/#!/amendments/14/essays/168/state-action. Longer than many of the others, this 2000-word article starts by providing the historical context. The 14th Amendment was proposed and ratified after Congress voted to override President Andrew Johnson’s veto of the Civil Rights Act of 1866. The amendment gave “Congress the power to enforce…prohibitions against certain state actions, directed at states and those acting on behalf of states,” law professor Patrick J. Kelley explains. This essay, like many of the others, gives much weight to the historical meaning and interpretation of the wording of the amendment, as well as explaining different viewpoints, and citing case law that shows how it has been applied.

A caveat: Although the essays are not dated, discussion of applying the 14th Amendment to state restrictions on gun ownership reveals that this particular essay predates the 2008 Heller and 2010 McDonald decisions although the Guide to The Constitution was originally published in 2005 and the second edition is dated 2014. This leaves me uncertain that updates to this work have kept pace with major Court decisions.

I was likewise disappointed to find only one essay on the Second Amendment, while many other topics in The Heritage Guide to The Constitution warranted multiple essays to illuminate the various principles behind these restrictions on governmental over reach. I try hard not to study only material that favors a gun-rights viewpoint, but it seemed an odd shortage for a foundation committed to “conservative public policies based on the principles of free enterprise, limited government, individual freedom, traditional American values, and a strong national defense,” according to the heritage.org website.

While none of the more recent USSC gun rights cases were discussed, the essay about the prefatory clause to the Second Amendment explains that at the time the amendment was argued and ratified, no one even considered that Americans wouldn’t be allowed to own guns capable of defending their communities or backing down a tyrannical government. The most contentious issue of the day, writes essayist Nelson Lund, entailed the power of the federal government. “Implicit in the debate between the Federalists and Anti-Federalists were two shared assumptions: first, that the proposed new constitution gave the federal government almost total legal authority over the army and the militia; and second, that the federal government should not have any authority at all to disarm the citizenry.”

Another topic of perennial interest addresses restrictions on intrusive government searches, whether occurring incident to arrest, or “every search of every person or private area by a public official, whether a police officer, schoolteacher, probation officer, airport security agent, or corner crossing guard,” writes the essayist, Gerard V. Bradley, professor of Law at Notre Dame Law School. Discussion of the Fourth Amendment is split into two parts, the first addressing the historical and philosophical aspects, the second, written by Harvard Law School Professor William J. Stuntz, covers criteria that must be met to obtain a search warrant and when a warrant is required for a search to be legal. It outlines searches that are allowed without warrants, noting that today’s Fourth Amendment cases are concerned with warrantless searches whereas a generation ago, “the scope of the warrant requirement was the subject of a great deal of litigation.”

Although not light reading, the essays are written in reasonably plain language that anyone with a sincere desire to learn more about our constitution can understand. My Internet browser has already memorized the path to The Heritage Guide to The Constitution and I’ll be back on the site to continue learning from the essays published there. I recommend it.