Are you training this summer? If not, why not? I just got done giving a lecture entitled Firearms Instructor Liability Issues at an instructor development course being taught at The Firearms Academy of Seattle by Network member Kathy Jackson and her Cornered Cat Training Company (see http://www.corneredcat.com/classes/). During my lecture, I discussed the idea of continuing to train on a yearly, if not monthly, basis. For an instructor who is concerned about defending their training program in a court of law, continuing education in the field of firearms instruction is vital. But it also applies to the non-instructor armed citizen, as well.

Society has demanded that police officers receive ongoing, job relevant training. If a department fails to train its officers, they are susceptible to failure to train civil litigation, if that failure to train results in injury or death to a citizen. If you want to read up on the subject, a good place to start is http://www.policeone.com/legal/articles/1665005-Legal-Corner-Departmental-Liability-for-Failure-to-Train/.

That relates to lawsuits against police, but it doesn’t affect the armed citizen, does it? Not directly, of course, because a private citizen cannot deprive another of their civil rights. But, the private citizen can still be sued for anything from the Tort of Negligence, the Tort of Wrongful Death, the Tort of Unlawful Battery, etc. And if you are caught up in an altercation and the wrong person ends up injured, then plaintiff's lawyers will likely be looking at the incident to see if there is a chance to win a lawsuit against you.

It is not enough to just learn how to shoot your gun effectively, you must also know the laws regarding self defense AND not make mistakes that would result in innocent persons being injured or killed.

Making the wrong decision is the first area of concern. In this column last month, I mentioned the Martin Zale conviction. Zale shot and killed a person in a road rage incident. While arguably it was a self-defense situation, Zale had other options he could have decided to employ, as opposed to rolling down his window and shooting. He is in prison and will likely spend the rest of his life there because of a string of bad decisions. Because of his lack of training, he was unable to articulate the rationale for why he made the decisions he did (and didn’t). 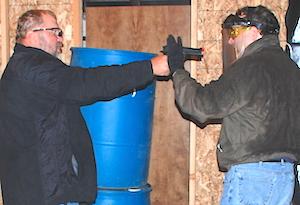 Have you ever trained in decision-making scenarios? If not, that is a huge hole in your preparation to use deadly force in self defense. When I started my training school, I modeled the curriculum after that of a police academy, modified, of course, for the armed citizen. We have four levels of handgun training, culminating in level four working extensively on decision making and force on force scenarios. Why? So our students can go in front of a jury and explain that they have been trained in exactly the same subject matters in which law enforcement officers are trained and that they used their training to assess the situation, then took the best options available to them at the time. And of course, to back up that assertion, I stand ready to go to court for any of my students and explain the rationale behind our curriculum.

Just having had the training once is not enough; armed citizens need to continue their training and repeat or seek out new training on a continual basis. When the process server shows up at the door and hands you the papers that claim you were reckless or negligent in your actions that day, you need some bullets in your gun to shoot back. Training in decision-making scenarios are those bullets. I will speak to this more in the upcoming months.

Click here to return to July 2015 Journal to read more.