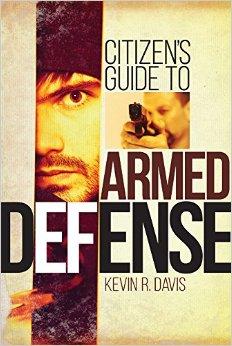 I enjoyed meeting Network member, author and trainer Kevin Davis at the NRA Annual Meeting in Nashville last April. In addition to letting me put a face with a name, Kevin graciously gave me an autographed copy of his latest book, Citizen’s Guide to Armed Defense. I have enjoyed reading it these past few weeks, and believe our members will also enjoy it.

Written in a thoroughly personal voice, Citizen’s Guide to Armed Defense is generously sprinkled with anecdotes and case studies from the author’s career in law enforcement and includes a lot of quotes from quite a variety of sources.

I was surprised, while reading the book, at how many resources Davis and I share in common, as I read quote after quote from a wide variety of leaders who have influenced my own thinking. Other quotes, amusingly, are from popular culture, books and movies that many have seen, and are cited to cement the lesson in the mind of the reader.

Davis likens common advise to harden the home’s exterior and take other theft-prevention steps to the armed citizen’s decision to carry an array of safety rescue equipment—a gun and spare ammunition, a cell phone, and perhaps the OC and expandable baton he always carries. He illustrates awareness without paranoia, addressing what he terms “Vigilance vs. Apathy,” in one subheading. Advice to avoid dangerous areas is supported by an interesting analysis attributed to Kristy Kilgore: “A high risk environment is any place where other people have more control over the variables than you do.”

Speaking from experience, this law enforcement officer defines the very real threat criminals pose, offering stories and explanations of the evil the reader may encounter. One case study tells of a criminal Davis describes as an “intelligent, cunning and extremely violent man with absolutely no remorse,” illustrative of many of the predators working in society. While Davis spells out clearly the dangers criminals pose, the chapter concentrates on recognizing and interdicting crime, and is much more than a recitation of the problem.

This chapter also includes an excellent synopsis of pre-assault behavior that manifests as the sympathetic nervous system is activated by the assailant’s agitation. Bear in mind that the SNS is also activated in the intended victim, and the author spells out the myriad effects of hormones entering the system when a threat ambushes you. In citing training as part of the solution, Davis writes, “Repetition of motor skills develops training competence, competence=confidence, and confidence helps control the SNS.” In later chapters he provides other tips for controlling the tunnel vision, auditory exclusion, shaking hands, and fuzzy thinking common to the body’s emergency response system kicking in.

In his chapter The Reasonable Person, Davis dissects the many factors that justify use of force in self defense. Many authorities’ quotes comprise this chapter to explain factors including multiple assailants, unarmed and armed assailants, defense in the home and applications of Stand Your Ground. It is a studious chapter, requiring a bit more focused reading than earlier chapters. In discussing how the totality of the circumstances determines justification, he bullet points a list of errors that can impinge on your argument that your use of force was reasonable.

The chapter on tactics has many lessons, including a good list of reasons to avoid predictable routines a stalking criminal can exploit to set up a trap or ambush. Criminal interview tactics—their steps to assessing whether or not you will make a good victim—are also outlined, including preliminary chit-chat. Although Davis emphasizes the value of always carrying a gun and later outlines principles for firearm selection, he acknowledges the mental aspect of surviving violent crime. “Many times armed self-defense can turn into a hardware conversation or a focus on guns and gear when it should be mostly about ‘software’ or the mental aspects…” he writes. “In addition to having equipment, you must know how to competently use your deadly and non-deadly force options, observe pending danger, strategically avoid if possible, be prepared to repel or stop the threat efficiently, while handling the stress of the encounter–to shoot (if necessary), move and communicate,” he concludes.

Beyond the mindset, though, Davis discusses accurate shot placement and ammunition selection. From there, he moves on to drawing to either a ready position or on target, use of cover, movement, building searches, verbal challenges, what the armed citizen should expect from police if an intruder is in their home, making the best use of time and distance, working under poor lighting conditions, flashlight selection and use.

Although strongly in favor of weapon-mounted lights, he writes, “While using weapon-mounted lights for SWAT, I would have a white light around a lanyard on my wrist. Yes, I had a white light on my MP5 or M4 and a Xiphos on my Glock 19 in my holster, but I also had a Blackhawk Gladius on my wrist. In this way, I could search or illuminate an area without pointing a firearm.”

Closing out a 90+ page chapter on tactics, Davis observes that inhibitions about cheating or taking unfair advantage don’t apply to violent encounters, describing the aggressor’s actions thus: “They are the one who put their arm in the lion’s cage. They are the one who started it,” which he attributes to a fellow trainer.

Execution of good tactics is the result of good training undertaken well in advance. Davis writes another long chapter on training, observing, “Unfortunately the training that most CCW permit holders go through is better described as an introduction rather than serious, worthwhile training. Training preparation for the armed citizen need not be as intensive as an Olympic athlete or Navy SEAL but good fundamentals practiced on a regular basis will certainly improve your chances.”

In this chapter, Davis covers shooting platform, trigger control and sight use, describing Jeff Cooper’s flash front sight picture concept and wisdom that “the body aims and the eyes verify.” After discussing skill maintenance with dry fire and related skill-builders with technology like SIRT pistols, he concludes the chapter with a lengthy discussion of the necessity of simulation training and options for force-on-force, shoot-don’t-shoot, and stress inoculation, to learn how to work through the effects of stress.

Delving into the final chapters of the book, we find a lot of good advice for interacting with police after self defense, including several check lists, advice for interacting with dispatchers, and what to expect when officers arrive on the scene. “Keep your mouth shut except for the following,” he writes, then lists, “You do want to clearly state: you are the victim; where any evidence might be located…where you were, where they were and in which direction you and he fired; ask for a victim advocate,” he concludes.

Davis, a 34-year career law enforcement professional, adds a useful chapter on non-emergency contact with police for armed citizens. Even more valuable is the next chapter about dealing with investigators, in which Davis explains that small police agencies (comprising the majority of law enforcement in the U.S.) lack experience investigating shootings and their administrators “have little knowledge about the legalities of use of force” and are generally political appointees. He underscores that both police and citizens will be treated as criminal suspects after causing the death of another citizen.

His advice touches on preserving evidence of the assault, insisting on legal counsel during questioning, and he makes a strong recommendation for belonging to the Armed Citizens’ Legal Defense Network. Although I knew Davis was a Network member, of course, I did not realize he had written such a strong endorsement of our organization until, closing in on the end of the book, I read his explanation of Network membership benefits. This chapter also details post-incident realities like memory distortion/loss, coping with flashbacks and other stress.

You will want to read Citizen’s Guide to Armed Defense with a notepad and pen close at hand. It is full of references to useful books by other authors, and with interest ignited by Davis’ advice, you will want to do some follow up reading.

Click here to return to July 2015 Journal to read more.