by Marty Hayes, J.D.
As we begin our eighth year of operations here at the Network, I thought I would share a letter I just received from a member. The writer, Rod S. from Arizona, was involved in our eighth use of force incident by a member, and because the incident is now resolved, we can talk about it a little. But instead of me telling you the story, let me share our member’s words:

Dear Marty,
I just wanted you to know how much I appreciate you, Gila and the whole staff at Armed Citizens' Legal Defense Network. The support I needed after defending myself from an aggressor and his friend was invaluable.

Even though I was carrying (concealed) at the time, I never showed my weapon but instead pulled a golf club as I was on the golf course at the time. I was hoping this would keep him from stealing from my golf bag. Because he got a scratch on his wrist and he and his friend lied to the Sheriff’s deputy, I was given a misdemeanor ticket.

I contacted a lawyer and you, and then you promptly jumped in to help me. What a relief that was, having someone on my side to help. 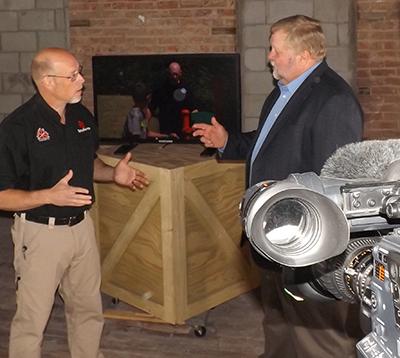 After months of postponed court times and such, the citation was finally dismissed completely. After all of that, it took another month to get my golf club back from the Sheriff’s department as the paper work had to go through several different departments. What a bunch of hooey!

Again, thank you so much for creating ACLDN. My wife Carol and I will be members for life. I never thought I would use it but it sure came in handy. The service you personally provided was outstanding, quick and you really know your stuff. It took a real load off my mind, and I am very grateful for that.

As you might expect, that pretty much made my month of December. Thank you for being a member of the Network, Rod. It was our pleasure to help you out.

My Fourth Year on The Best Defense

This last month saw me flying to Tulsa (headquarters of Outdoor Channel) to go on set and join The Best Defense crew members Michael Janich (left) and Mike Seeklander (below) in filming the legal segments for this popular self-defense TV show. 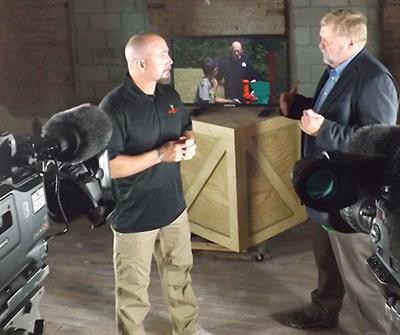 Instead of dressing me up in a suit and tie and plopping me in front of a camera to dispense some legal education, we changed the format a little and either Janich or Seeklander interviewed me about the legal issues involved with the self-defense scenarios of the different shows. We all were pleased with the outcome of the brief segments–twelve in all, lasting five to six minutes each.

Those who know me well will realize just how painful these are to do. I would rather be doing just about anything other than participating in on-camera events. As the years go by, it does become easier and I feel it is a necessary part of what I do here at the Network. Someday I will retire from my role as president of the Network, and the next president (whomever he or she is) had better be prepared for this public role. It is the price I pay for the privilege of serving you, our members. The Best Defense airs on The Outdoor Channel on Wednesday nights, starting Dec. 31. See http://outdoorchannel.com/the-best-defense.

Have you received your book yet?

You know, the book we mailed out to all our members? The one our Advisory Board member Massad Ayoob wrote, called Deadly Force: Understanding Your Right to Self Defense? If you are a current member, and have not yet received this book, we want to know about it.

We have received several dozen of the books back in the mail, because the Post Office could not deliver them to members who had not notified us of an address change.

We’ve sent emails and left phone messages asking for a current address. Please take the initiative and contact Gila at This email address is being protected from spambots. You need JavaScript enabled to view it. and let her know your new address.

Keeping those mailing addresses current is also important because before too long, we’ll be sending out our next educational effort to you. I am back to work on the project called Anatomy of a Self-Defense Shooting, which I mentioned in the June 2014 newsletter. This is a video presentation with Attorney Chris Ferro, Spencer Newcomer (who later became a Network member) and myself discussing the self-defense incident Newcomer was involved in two years ago. I personally think it will be one of our best DVDs to date, so that is why I am anxious to get it finished and out to you. So, PLEASE, if you have moved since joining the Network, we need your current mailing address!

SHOT Show 2015 Around the Corner

If you see Vincent, Gila or me wandering around the Sands Convention Center in Las Vegas in a couple weeks at the 2015 SHOT Show (http://shotshow.org), be sure to stop us and say hi. I have a couple of projects that I will be working on, as will Gila and Vincent, but we would love to stop and chat for a minute. Who knows, you might even get your picture in the next eJournal!

Next month, I will give a report on the state of the industry, at least as it affects our own little piece of the business.