Massad Ayoob’s interview in last month’s journal about answering a knock at the door generated quite a lot of discussion. A member from FL requested, “I and perhaps a few other members would appreciate a short list of protective equipment we might consider adding to our residences…motion and photocell driven floodlights, motion activated doorway area video or audio-video recorders, and so on.” As if in answer to his request, another member offered us a briefing from his work as a security technician, which we are happy to share.

Capable and reliable home surveillance systems are more affordable than ever. Last month’s article by Massad Ayoob clearly showed the advantages of having an eye outside of your home. The ring® video doorbell is inexpensive and can be installed by anybody; I recommend it without reservation.

Some people would like to know a little more about what is going on outside, or to record from multiple areas. A more traditional surveillance system, known as Closed Circuit Television (CCTV), can be used. There are many advantages to a wired CCTV system, better quality and reliability is number one. The biggest disadvantage of a wired CCTV system is retro-fitting it into a finished home. I would like to share some of the things I have learned that make this process much easier.

First, select a modern Digital Video Recorder (DVR). A modern DVR should be capable of remote viewing and playback from a smart phone/tablet or a computer. Setting it up online should be a very easy process, the units I sell and install do not require a static IP address. It should also store two or three weeks’ worth of High Definition video. HD cameras are a must; they will aid in getting actionable recordings and provide the best live information. Cameras that have infrared illumination along with a low light mode will provide useful video at night. A properly set up system will produce clear, identifiable images. 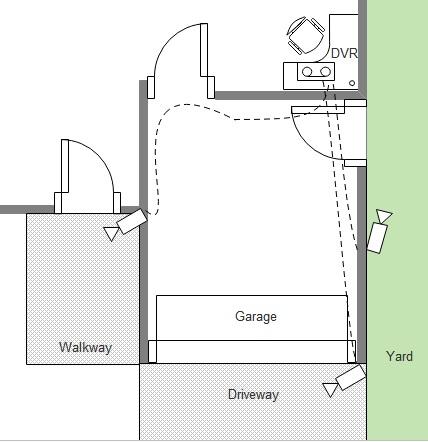 Second, use the architecture of your home to your advantage. A ranch style home with an accessible attic is probably the easiest to wire, simply pull the cables from the exterior views through the attic. The cables can be run down the wall and into the DVR’s secure location. Be sure to run a network cable from your router to the DVR, or buy a Wi-Fi capable DVR. (It probably goes without saying, but if accessible by Internet, the router and other parts of the system need strong usernames and passwords, not just the default it came with from the manufacturer. --Editor)

If you have a two-story home or a garage, you can run the wires inside the garage as shown in the diagram to obtain at least three camera views. I have used the garage method to save my customers a lot of money; I can install three exterior cameras in under two hours generally, covering their garage/driveway, front door, and side entrance to the yard. The fourth camera is typically installed inside near the DVR, usually in the mechanical room or to watch a safe.

By carefully mounting cameras, we can avoid “pixel man,” the most wanted guy we can’t identify in America. The camera in the photo below is shown mounted around seven to eight feet high, out of reach, but low enough to provide great detail. It is mounted to take best advantage of its wide angle lens, note the front door and the approach to the door shown in the photo above is well covered. 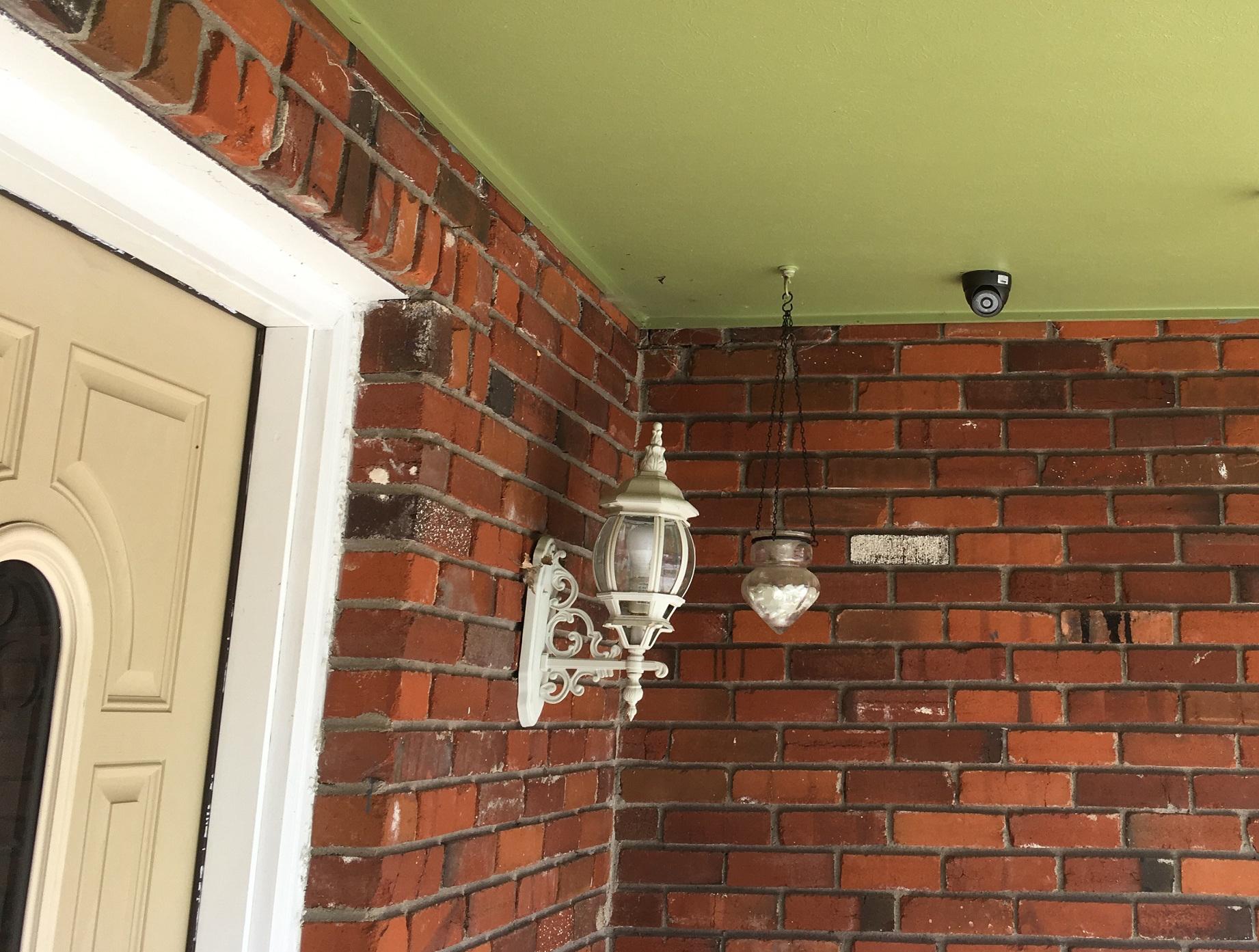 Some other tips:
- Drill through walls carefully. The wiring is typically attached to a stud, so drill in between studs. Consider drilling a small diameter exploratory hole before drilling a large one. 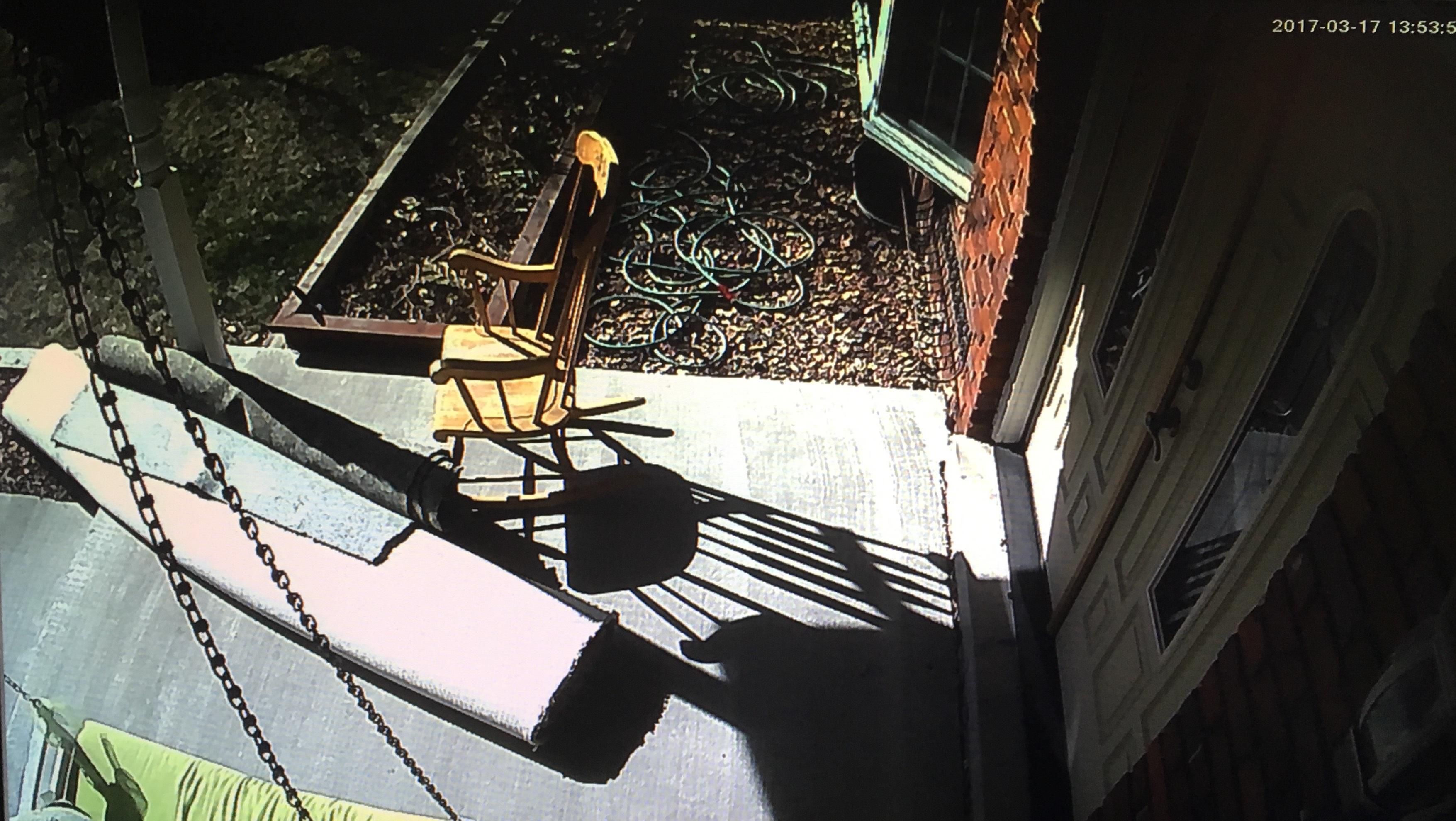 - Make the holes where the camera mounts large enough, ¾” should allow enough room for the cable connectors to pass back into the wall, and come out when servicing the camera.
- Put the DVR in a cool, well ventilated, and secure location.
- The Network has spoken at length about being on good terms with your neighbors. If a camera is going to surveil part of your neighbor’s property, be sure to discuss it with them. Most people are happy to have free security, but others may be uncomfortable with it. Redesign your system to accommodate their concerns.
- If you are uncomfortable doing this type of work, hire your local independent security company. Many will install your equipment for the cost of labor.
__________
Benjamin Jolly is studying for his B.S. in Electrical Engineering at the University of Colorado in Colorado Springs. He works as a security technician and enjoys shooting 3 Gun in his spare time.

I don’t usually comment on stuff, but a comment you made [in the March journal] triggered a response that I thought I would share. You said, “answering an unexpected knock at the door.” From my perspective (selfishly perhaps), it’s my door and I don’t have to answer it if I don’t want to. As far as I’m concerned, if someone is standing at my front door uninvited, they are trespassing and will be treated accordingly.

No, I don’t live out in the middle of nowhere, I live in a suburban neighborhood surrounded by houses that look just like mine and I get along well with all my neighbors. So if I hear a knock at the door and when I look out of the peephole or out of the window and don’t recognize the person, I don’t answer the door. I pretend to not be home. If it is a neighbor, relative, mail lady, or friend, then of course I open the door. But if it appears to be a utility worker, UPS man, police, or other supposed trustworthy authority figure, I answer the door armed (concealed, of course).

I am usually armed in the house at all times anyway, so it is second nature to be so. With all the stories lately on the news about UPS delivery pretenders robbing people in their homes, I think it is best to treat everyone as a potential threat. My friends call me paranoid, I say I’m just careful. My friends say what if someone wants to tell you your house is on fire, I say, then they need to call the fire department, yell at me that my house is on fire, or, if my house was on fire, I would already know it.

This is long winded email to what was going to be a short reply. But I think if more people did what I do, there would be fewer home invasion robberies, fewer phone scams, and life would be a little bit better.

I love your monthly newsletter and I am grateful to be a member of the Armed Citizens’ Legal Defense Network.