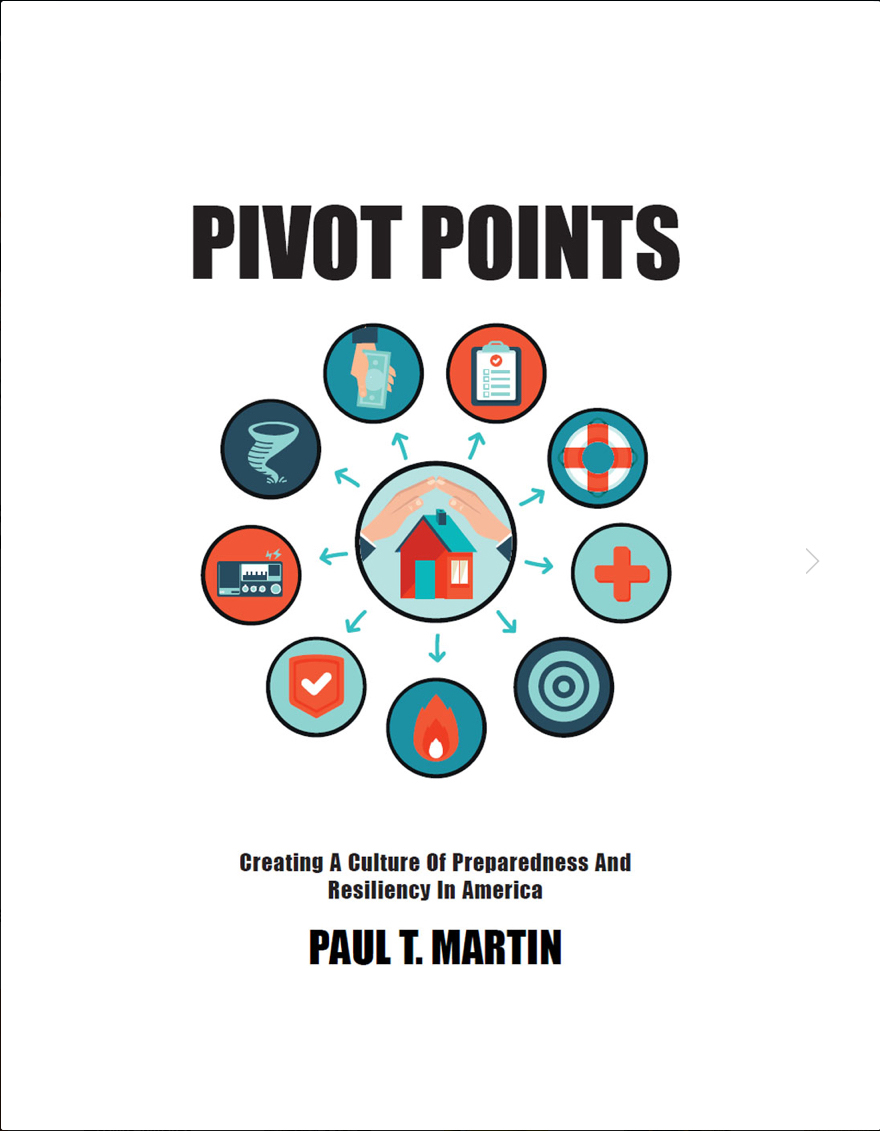 Creating A Culture of Preparedness and Resiliency in America

I read to learn. Biographies teach me about events and people, and as you know if you read this column often, “how to” or instructional writings top my reading list. I am not a big consumer of inspirational or motivational books. This month, I somewhat inadvertently stumbled into an inspirational book when I picked up Pivot Points by Paul Martin and started reading.

I became intrigued with comparisons between the challenges facing the preparedness community and prejudice with which armed citizens contend. Martin brainstorms how to overcome prejudices that inhibit growth of the prepper community when the ignorant and misinformed equate preparedness to hoarding and bizarre doomsday fears.

The numbers of dependent Americans who couldn’t survive a week-long emergency compare poorly against previous generations of Americans who enthusiastically embraced self-sufficiency, Martin writes, reminding readers of the Victory Gardens planted by many of our parents and grandparents during World War II, civil defense leagues, and even today, our rich heritage of volunteerism in emergency services. In the same way, he observes, being prepared for power outages or disruptions to sanitation or emergency services is elemental to good citizenship.

Martin promotes the idea that by encouraging preparedness, entire communities can avoid collapse if hit by catastrophic flooding or deadly weather events. Fewer victims mean less strain on fragile police, medical, or supportive services that provide food, sanitation, heat or cooling. Preparation prevents many from falling ill or being injured in the first place. “Look at it this way, he writes. “If ninety percent of those people in the Superdome hiding from Hurricane Katrina had a good plan, some supplies, and some know how, would they have fared better? Probably so.” He later exhorts, “Building a culture of preparedness means entire communities are part of the culture.”

Martin’s call for grassroots leadership includes an echo of our Independence Day book review about the roots of the Republic. “Successful self-government requires that citizens willingly participate in public affairs, make sacrifices for the common good, curb their selfishness, and join in taking responsibility for themselves and others. The central question for those concerned about maintaining the health of our republic must be, ‘how do individuals acquire the virtues necessary for self-government?’ History provides only one answer: through the institutions of civil society, like the family, religious groups, and voluntary associations, which inculcate a sense of moral values in the young.”

While citing gun ownership and shooting skills as part of the prepared lifestyle, along with stockpiling supplies, Martin also stresses good health and physical conditioning, connectedness within neighborhoods, shouldering leadership responsibilities, and good citizenship as the foundation of getting through tough times.

Practice preparation daily, he recommends, suggesting that readers “Make an everyday carry (EDC) kit. You can take a small flashlight, a pocketknife, a section of paracord, and a cell phone almost anywhere ... Never leave the house without them. Have it nearby wherever you are. Most of us will never have to fight our way through the chaos spawned by a crazed gunman at the mall or live through a protracted economic collapse. The odds are much higher that you will need to illuminate a darkened parking lot or cut a length of string to tie something together. Good citizens prepare themselves to handle large and small emergencies.”

Encourage preparation within your circle of influence, Martin urges. He suggests workplace lunch-time seminars and safety campaigns, inclement weather drills, fun neighborhood “grid down” cookoffs, and even charity work, not to bail out those living in poverty, but to prepare people in advance, since the poor suffer the worst during disasters. He highlights the value of food banks that can help poor families with meals and recommends youth-focused educational efforts because lasting culture change begins with the young. He suggests training for kids to focus on life skills, first aid and emergency care, crisis leadership and “enabling them to help themselves and others.”

In a thought-provoking chapter, Martin discusses the power of citizens speaking out for unpopular beliefs – in his case, prepping. He stresses that he is not critical of proponents using fake names or shielding where they live or work, but adds, “I do think there is a place for some of us within the movement to use our real name, identify the city where we live, and make ourselves available to talk face-to-face with those who want to learn more about what we are doing. If we are going to create a culture of preparedness in America, people need to see others setting an example of it. Right or wrong, it is the decision that I have made, because I believe it is the best one for me.”

As I admitted, I am not much for motivational books. I appreciated the way Martin’s book provided meaningful examples of parallel experiences we already experience as armed citizens. His encouragement to be an exemplary citizen and to encourage good behavior in others, really resonated with me, too.