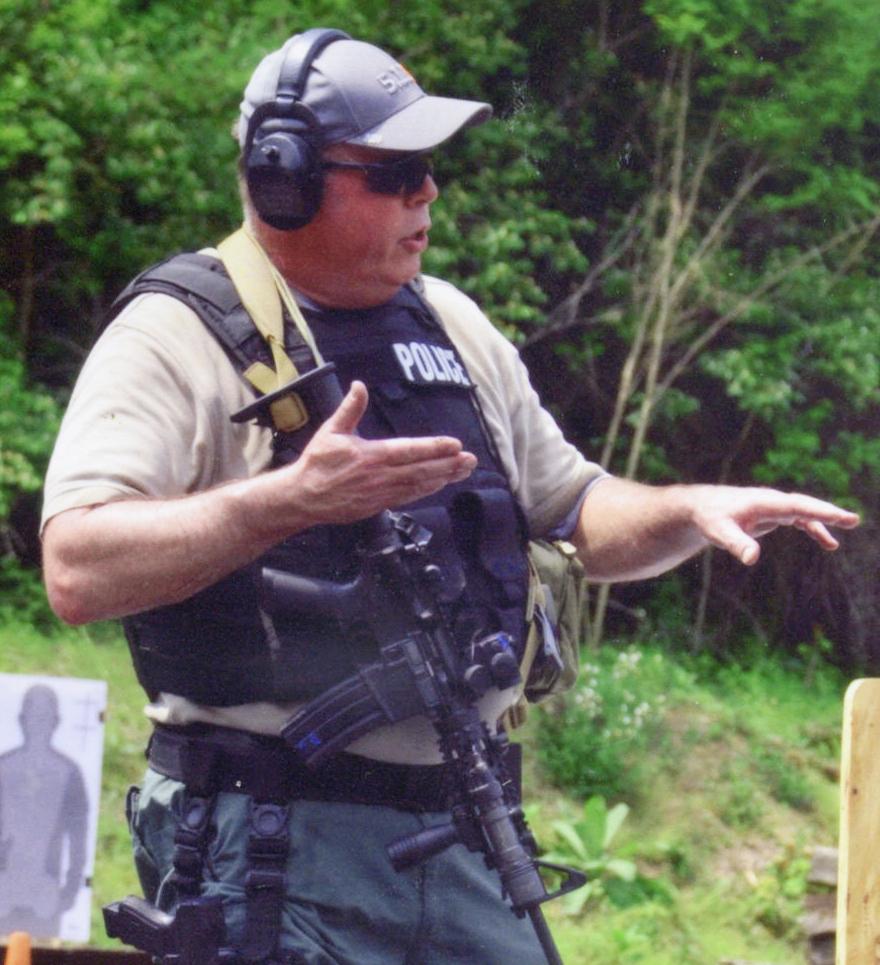 An Interview with Kevin Davis

Private armed citizens using a gun in self defense and lacking a law enforcement badge to identify themselves as “card-carrying good guys” have the additional concern of being mistaken for the assailant. After containing the first danger–surviving the deadly threat that caused them to draw the gun initially–armed citizens must worry about a second danger: being mistaken by responding law enforcement as the criminal who committed the assault.

Kevin R. Davis (shown teaching in photo, right), a career police trainer, patrol officer, SWAT team member, expert witness on police use of force and author, recently answered questions about police/armed citizen interactions raised by a chapter he wrote in his April 2015 book, Citizens’ Guide to Armed Defense, published by Gun Digest Books. That was Davis’ second book, following the 2012 publication Use of Force Investigations: A Manual for Law Enforcement. The first book, Davis explains, grew out of his work “as an expert witness defending police officers in shootings and other use of force incidents. It was based on too many law enforcement officers being charged with crimes in perfectly good uses of force, sadly.”

We wondered how those concerns affect armed citizens’ use of force in self defense. Let’s switch now to our Q & A format as we discuss these and related topics with Kevin Davis.

eJournal: Are there parallel lessons between your two books–one for law enforcement, one for private armed citizens?

As I start this month’s column, I am flying home from a planning meeting for next year’s season of Best Defense TV, shown on the Outdoor Channel. This will be my fifth year of discussing legal issues on the show, and I feel very proud that the show endures and has become a fan favorite on the Outdoor Channel. A big thanks to Michael Bane (the show creator), and co-hosts Michael Seeklander and Michael Janich for accepting me. Last season we won the Golden Moose award for the best shooting show on the Outdoor Channel, and we are hoping that we at least get nominated again this year. It will depend on the viewers, or course. I will let you know when nominations are open!

While there are many fine instructors and attorneys across the country that are teaching use of deadly force along with defensive handgunning, when you draw up names on an “A-List” of trainers, the name Massad Ayoob always appears on that list. I am fortunate to have worked with Mas for 26 years now, and this year is no different.

Use of deadly force in defense of others is the topic we are currently discussing with our Affiliated Attorneys. Here is the question we started last month—

Under your state’s law may someone (not personally threatened with deadly force) use deadly force to stop the in-progress and/or imminent commission of certain crimes? What crimes? Must the crime actually be occurring or imminent, or would deadly force be lawful if the intervenor only believed that one of such crimes was occurring or was imminent?

So many affiliated attorneys responded that this is the second installment of the answers, which we will wrap up in the September edition of this journal.

It never hurts to get in a good review of the principles underlying justification for use of deadly force in self defense, and that is what I did a few weekends ago. I enjoyed the DVD program I watched so much that I decided to share it with Network members in this month’s book/DVD review column. The “big gun” when the topic is justifiable use of force in self defense is Massad Ayoob, who, by way of full disclosure, is a valued member of the Network’s Advisory Board. Ayoob is the lecturer on three of Panteao Productions’ Make Ready series, this one entitled, Make Ready with Massad Ayoob: Deadly Force FAQ.

For new readers, Ayoob’s experience spans four decades of teaching, writing, policing and working as an expert witness in the courts, focusing on use of force.

The National Shooting Sports Foundation (NSSF) has recognized our affiliated instructor Kevin McNair, of Tactical West in Las Vegas, NV as a “Local Champion” for his efforts to promote firearm safety in the region. The recognition comes as NSSF continues its third annual Project ChildSafe “S.A.F.E. Summer” campaign to emphasize the importance of responsible firearm storage–particularly while children are home from school and more likely to be unattended.

McNair was selected for his diligence in promoting firearm safety throughout NV. He regularly runs programs that include both classroom and range instruction, including hunter education classes through NV’s Department of Wildlife, group and private firearm classes and hunting seminars. He is a multi-state licensed concealed carry firearm instructor and chairman of the local chapter of the Mule Deer Foundation. He is also the local Bass Pro Shop’s hunting pro and exclusive firearm instructor and prepares local Boy Scouts who are working to earn firearm-related badges.

“We can’t apply the KISS principle in this class
because it is not simple and you are not stupid.”
–Massad Ayoob, teaching Judicious Use of Deadly Force

“I have some questions that I need you to answer with just yes or no,” insisted the member on the other end of the phone line. “Oh, no,” I thought, “Is it possible to break down something so complex as Network aftermath assistance to ‘yes’ and ‘no’ responses?” As it turns out, it is not possible to accurately explain the various ways in which the Network assists members with one-word responses.