The Gentle Art of Persuasion 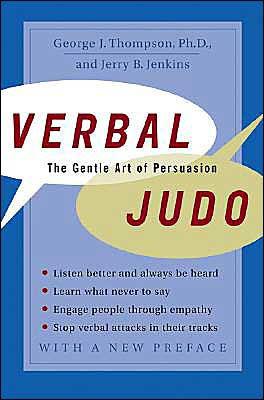 This month, I enjoyed reviewing a classic written by the late Dr. George J. Thompson. I reread it to refresh understanding of how and when our words amp up conflict and when our words can calm a potentially violent confrontation. Verbal Judo is one of those “old but great” books that deserve to be reread now and again, so I thought I’d share some of my notes from this classic.

Thompson wrote that he taught Verbal Judo in seminars and in this book to encourage “better communication through empathy,” skills applicable to law enforcement as well as customer service, education, business and medical professionals, to name only a few. In 2018’s conflicted America, I think it is more important than ever to seek training in what he described as “the art of finding the right means and the right words to generate voluntary compliance.” He taught how to reduce “conflict, tension and abuse,” in daily life, through “responding, not reacting” while taking control of stressful situations. I thought Thompson’s book was a great catalyst for introspective self-analysis and improvement, even after all these years.

Thompson wrote about fostering cooperation in difficult people through redirection, not resistance. Achieving compliance starts with better communication, he taught, and the basis for optimum communication is empathy, and respecting the dignity of others. In the 1980s when this book was published, there was a lot of focus on cultural and gender differences. Instead, he suggested there really were only three personality types: nice people, difficult people and wimps. Communicating and forging cooperation requires different approaches, and much of his writing dealt with not getting spun up in arguments with difficult people or avoiding backstabbing from wimp personalities.

Difficult people always want to know why, Thompson continued. They need to know, ”What is in it for me?” He explained, “When I want voluntary compliance from a Difficult Person, I explain early on what’s in it for him. As clearly and specifically as I can, I show him what he has to gain. Only when that doesn’t work will I tell him what he stands to lose.”

Thompson suggested that handling interpersonal contact skillfully starts with knowing what sets you off. For some, that may be challenges to authority; if so, recognize that trigger and keep the anger hidden. Only through acknowledging weakness, do we have the power to control our flaws. “Make a list of your most harmful weaknesses. Then name them. Give each a little tag and pin it wriggling to the wall of definition. Then you own them. Once you’re in control inside, you can be in control outside,” he advised.

Thompson stressed the necessity of matching word to deed and deed to word, and that calls for emotional control and the “ability to stay calm and avoid the anger.” Cultivate a mental state in which other, difficult people can’t rouse your anger, he advised. “The samurai warrior, when surrounded by attackers, went absolutely still inside,” he compared.

It is all too tempting to act tough when we approach difficult people. “The first principle of physical judo is to not resist your opponent. Instead, move with him and redirect his energy. Ignoring or dismissing a question is the same as resisting it. In Verbal Judo you do not try to shut out pesky questioning of your authority, reasons, or methods. It’s important to always answer, rather than dismiss the question when someone asks why...See questions as invitations to explain yourself, to tell what you do, to fill someone in on your views. Here’s the chance to educate a person, to win his respect, and provide him with deeper understanding so he won’t go away angry,” Thompson explained.

Here are a few examples of restructuring how we approach others. If tempted to say–

Some of the other danger phrases included–

Verbal Judo is full of lists and this chapter provided a lot of language that encourages cooperation.

The next few pages were very interesting as Thompson taught how to respond to the above examples of verbal aggression, to stay safe, keep the exchange reasonable, and defuse the aggressor’s emotion. Throw-away phrases, like “I appreciate that,” indicate you’ve heard the other person and may even sound a little humorous, but can also cut through building tension and allow you to move the conversation forward to the goal as needed.

Having taught deflection, Thompson turned to how to employ paraphrasing to “cut into a tirade and take control.” There is a sentence, he wrote that is, “empathetic, so full of conciliation and cooperation, so pregnant with sincerity, that you’ll hardly ever see someone let it slide by.” It is, “Let me be sure I heard what you just said.” He explained its power, “Paraphrasing is gentle. It tones down the volume and makes a diatribe a conversation. There should be no condemnation in the completely disinterested voice, the essence of effective paraphrasing. Paraphrasing should make me sound as if I’m trying to work on the problem, rather than react to the problem,” he wrote.

“One of the greatest communication skills is listening, really listening to people—to what they say and how they say it” which requires empathy, Thompson reiterated. Listening is not our natural state! “Active listening is a highly complex skill that has four different steps: Being open and unbiased, hearing literally, interpreting the data, and acting,” adding later, “Underscore these by projecting a listening face.”

“When you’re on the listening end, you may be open and unbiased and able to literally hear, but how do you interpret what you’ve heard so you can decide on a course of action?” Thompson asked rhetorically. “Start with one of my undeniable, inarguable, street-survival truths: People hardly ever say what they mean. If you react to what they say, you make a mistake. People under the influence of liquor, drugs, rage, fear, anxiety, ignorance, stupidity, or bias, don’t mean anything they say. If you begin to grasp this point, you can become a more effective communicator,” he wrote.

Mediation, Thompson explained, is “redirecting behavior” through giving comparisons between the bad things an opponent was headed for compared to lesser problems if suggested alternatives are accepted. He taught, “reach people by putting what you want them to do in terms of what they have to gain or lose. If your opponent or customer has something to gain or lose, you have something you can use.” He comments about one mediation he experienced, “I had to think with him and—because he was under so many influences—I had to think for him, too.”

This book contains so much material! In closing it bears a reminder of the five basic principles of Verbal Judo:

Thompson outlines strategies for various situation, far too many to list here. When I began rereading Verbal Judo, I thought it would be fairly quick to read. Much later, I realized it was slow going because of note taking–so much of the instruction is applicable to smoothing day-to-day contacts that I took extensive notes for later review. I had forgotten how many useful strategies Verbal Judo incorporates and how many I’d forgotten.