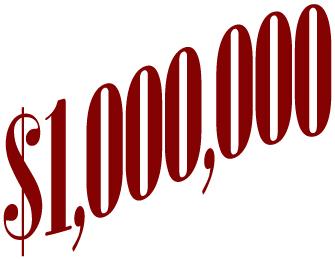 Has a nice ring to it, doesn’t it? I am extremely pleased to announce that the Armed Citizens’ Legal Defense Network’s dedicated Legal Defense Fund now has in excess of One Million Dollars in four federally insured bank accounts, just waiting for a member in legal jeopardy after self defense! This fund is NOT used for any operating expenses, but instead, is earmarked for the legal defense of members after a self-defense incident, as well as helping with bail, if needed.

A few explanatory words may be useful for those who are unfamiliar with how this works for members of the Network. If a Network member is involved in a self-defense use of force incident, the Network will immediately forward up to $25,000 for retainer to the attorney of that member’s choice, if that much is needed. Typically much less suffices for the initial representation, and for several years we limited the initial deposit to $10,000. That practice has been working fine, but with this million-dollar milestone, we decided to increase that amount, just in case. I find it conceivable that in a high profile shooting, with murder charges in the offing, the member’s attorney would require a higher initial retainer, seeing what the member and the attorney might anticipate coming down the road.

Primarily, increasing that limit is a change for the benefit of our members. Across the industry, it also alters the playing field. The Network initially set the standard for immediate assistance at $10,000 (which several competitors eventually matched); we have now raised the bar considerably.

After that initial retainer is used up, if the member is prosecuted or sued, we will fund a legitimate self-defense case up to ½ the total amount in the Legal Defense Fund, which now means up to a half a million dollars. That is also the highest assistance available in the industry; most other plans don’t even come close.

In fact, we are the only program that I know about that maintains a dedicated Legal Defense Fund to pay legal expenses all the way through incident to acquittal, retrials, appeals, and civil lawsuit. Competing programs either promise to provide attorneys whom they select (pre-paid legal schemes) or promise to reimburse you after you have funded the trial, fighting to achieve an acquittal (insurance models).

Why did we form the Network the way we did? Because, we know that insurance schemes will not work (at least for criminal defense). You need the money up front to fight the legal fight effectively, not as a reimbursement after the fight is over. In fact, it is actually to the insurance carrier’s benefit to see you found guilty; that way they do not have to pay out. Now, having said that, the civil tort insurance is not a bad idea, as the insurance carrier will be defending the civil claim (or negotiating a settlement) and would pay off if you were found culpable in civil court. While the Network will assist our members who do not have insurance with the civil trial, too, we cannot pay a judgment if the case cannot be won. Over the past several years we have been looking around the insurance industry for a good civil tort policy we might offer as an option to members. We will continue to look until the right one can be found.

Pre-paid legal schemes are only as strong as the legal firm’s willingness to pay for your legal defense. I have yet to see one that defines exactly how they purport to defend their clients. I know that if my freedom is on the line, I want the right to control who fights for me in court. That means hiring my own legal team. Network members will have the backing of the Legal Defense Fund to pay for that fight.

With the Legal Defense Fund reaching its $1 Million milestone, the Network is able to increase not only the initial fee deposit, but doing the math on how much is now available (up to ½ of the Fund) to defend a member’s self defense choices really shows the strength of our organization. Thank you to all our current members who have stuck with us over the years, and helped us fulfill our vision of the Network.